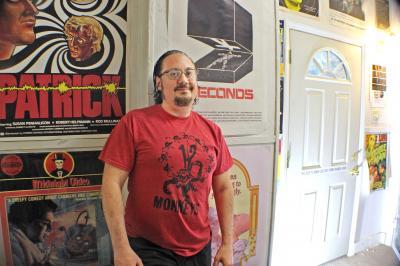 If locals recognize Craig Stadler's name, it's most likely because they are familiar with the Erie Movie House, Stadler's theater and venue that specializes in "everything classic, obscure, independent, and strange."

"My wife and our curator, Nicole, is really into film, and I am into nostalgia," says Stadler. "The 50-50 experience is what I think makes the Erie Movie House unique and special. I have stocked the venue with items from the 1940s to now, from pinball machines and fortune telling napkin holders to diner booths and antique video game consoles. We even offer virtual reality experiences, all in an intimate theater setting."

But the attention the Erie Movie House has drawn barely scratches the surface of Stadler's work, much of which has been invested in his own company — a result of the current tech boom and the creator's history within Silicon Valley. After years of learning code, Stadler began to contribute articles to computer magazines across the country, leading to his being published by the age of 16. Thus began a winding journey throughout the industry that would eventually lead him back to Erie.

"I got my real first job as a nuclear software engineer," explains Stadler. "After several years, I headed to California for the first 'dot com' boom in 1997. I started my own software company, East Bay Technologies, and developed the first television streaming product ever for Windows and Mac. Ctube, believe it or not, actually preceded YouTube! In 2011, I moved back to Erie with my wife to be with family and start another tech-related endeavor."

That endeavor would become Erie Data Systems, a company that continues to develop a storied history in our city. Stadler describes "big data" as his passion and focus, offering collection, organization, and meaningful access to large amounts of information. Erie Data Systems was the first company to offer these services to customers on a global scale, and Stadler is hopeful that the company may assist Erie in becoming more tech-centric.

Erie Data Systems' initial offering — Exif-Search — was the first product of its kind. It was also just the beginning for the blossoming institution.

"A colleague of mine suggested I catalog all the images on the Internet so they could be searched by their metadata, allowing police and research businesses to access them unlike ever before," recalls Stadler. "I decided to embark on the challenge first as a technical feat, soon realizing the impact it could have on a greater good."

With benefit to law enforcement on the mind, Stadler began searching for the most deserving test group to hand over one billion images to. This led to a widely publicized partnership with the National Center for Missing and Exploited Children (NCMEC). Full access to Exif-Search was donated to the organization to use on open investigations, and after only two months, Stadler received confirmation that the tool exceeded their expectations and would continue to be used.

As Exif-Search began to take on a new life, Stadler once again felt ready to make his next move with Erie Data Systems — this time, his inspiration coming from the gym.

"I was exercising and there were TVs on, naturally with captions," says Stadler. "I thought to myself, this is data, this is useful. So I did some research and was unable to locate any search engines used to find captioned data online. I set out to create a product to search for video content using closed captioning. My goal was to provide a single, simple place to find captioned videos online or on TV regardless of location, including Facebook, Youtube, Hulu, Netflix, etc. Why not provide necessary access to content with closed captioning to those who need it most?"

To better design the product that would eventually be known as CaptionSeek, Stadler worked with a focus group of sorts for the very first time, starting with an individual in Erie and growing to include members of the deaf and hard-of-hearing communities online. Initial reception to CaptionSeek was extremely positive, with many feeling their community was rarely catered to by the tech industry.

"If I could get validation from people all over the world who could utilize the search engine, it would give me the reassurance I needed to launch it publicly," says Stadler. "Additionally, following the launch, a father contacted me to let me know the tool was being used to locate videos for his young son who is autistic. It's always nice when something you've created goes on to benefit more than the communities it was targeted toward."

It's exceptional to hear the amount of work Erie Data Systems has been capable of in just the past year, and while it continues to grow, so does the Erie Movie House's presence within the community. The venue has grown into a space shared by sports teams, special needs groups, independent filmmakers, and companies not only local to Erie, but occasionally, from around the world. Stadler continues to balance these two demographics, and as the self-appointed "mad scientist" of Erie Data Systems, he believes in the importance of cheerleading the collective efforts of Erie's tech industry.

Aaron Mook can be reached at amook@eriereader.com

A Life in Paint