Secure Your Top Hats and Monocles for 'A Gentleman's Guide'

The historic Warner Theatre aids to the overall atmosphere of A Gentleman's Guide to Love and Murder. 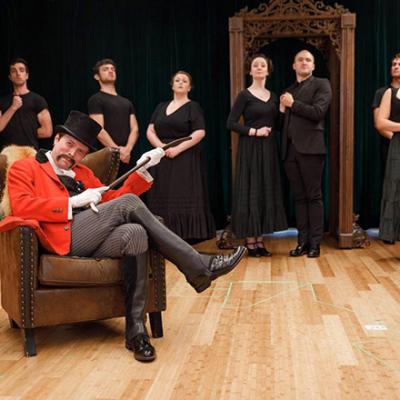 If you happened to catch Downton Abbey before its departure, you are probably quite aware of the fact that wherever there is money, an estate, a title and — of course — an English setting, mayhem is sure to follow. It surely follows the penniless but ruthless lead, Monty (D'Ysquith) Navarro, in 2014's Tony Award winner for Best Musical, A Gentleman's Guide to Love and Murder.

Set in early 20th century England, A Gentleman's Guide follows the son of a noble family's disinherited daughter and his vengeful course of murder, as he takes out every family member who stands in the way of his inheriting the earldom — by means both foul and flagrant. Based on a novel published in 1907, Monty's murderous social climbing might not resonate too deeply with us untitled Americans, but that certainly doesn't make watching his machinations any less fun.

Aiding and abetting in that overall atmosphere of mirth and grandeur is the glorious and historic Warner Theatre. Now entering into the fourth phase of a multimillion dollar restoration project, the Warner continues to operate as the premiere spot for national tours, bringing the excitement of the Great White Way to Erie and giving music lovers a break from seven-hour theatre commutes. Though it approaches 90 years of operation in the downtown area, the Warner gives every jewel of a production which passes through a special big-city sparkle you're not likely to find anywhere else in this area. — Cara Suppa