The Playhouse takes on Broadway 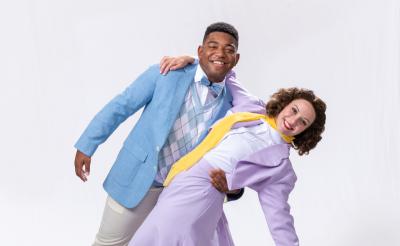 We all have dreams. Whether your dreams are big or small, the character of Peggy Sawyer in the classic tale of 42nd Street will steal your heart. She's a young, talented woman who never gives up and does what she can to pursue her dreams of becoming a Broadway star.

​Even if your dreams don't include Broadway, Peggy, as well as the cast of characters and fun musical numbers are sure to resonate with you. Richard Davis, producing director at the Erie Playhouse, explains that "A few years ago the Playhouse attempted to put 42nd Street onto our season, and we had a very strong response from our audiences that they wanted to see it. As we were looking at shows for this season of dynamic women, we were drawn to 42nd Street as it fit that mold."

​The Playhouse does not disappoint as they are proud to bring 42nd Street to the Erie stage. Davis promises that: "Audiences can expect dazzling sets, costumes, and great dancing. Choreographer Heidi Sheehan and director Almitra Clerkin have been drilling the dancers for 10 weeks to make sure that every step is spot on. 42nd Street also features many great songs by composer Harry Warren and lyricist Al Dubin that are standards of the great American songbook. Audiences can be assured they will leave with a smile on their face, humming a great tune."

​As for the dazzling character of Peggy Sawyer, it's safe to say that the casting was spot on. Davis emphasizes, "We are excited to feature 17-year-old Peyton Thiem as Peggy Sawyer. She blew our socks off at the audition and we are certain audiences will be thrilled by her performance."

If that isn't enough to get you running for tickets, Davis points out that "the cast also features Playhouse veterans Bob Martin, Diane Hardner, Patrick Thiem, Rae Jean Urbanowicz, and relative newcomer Aaron Holman. Our outstanding all-volunteer orchestra will be under the baton of Andrew Rainbow."

​If you're looking for a smile and tune to hum, then 42nd Street seems like a safe bet, and an all-around great time. — Kalli Oberlander