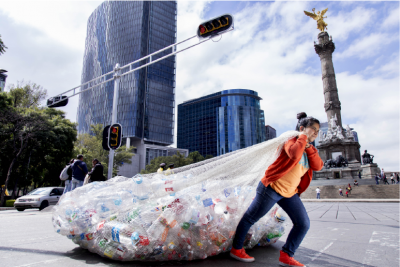 The Story of Plastic is not a pleasant one, but documentary producer Stiv J. Wilson believes it's one that needs to be heard and seen. The folks at the Film Society of Northwestern Pennsylvania passionately agree, especially with the planned installation of the International Recycling Group's "mega-sized" plastic sorting facility on Erie's bayfront looming large.

According to Wilson and the majority of environmental experts, sorting out our plastics problems is more than a matter of separating polyethylenes from polypropylenes and polystyrenes — it's a matter of separating plastics from our lives altogether. According to the Environmental Protection Agency (EPA), plastics constitute over 12 percent of the municipal solid waste stream today versus less than 1 percent in 1960.

Plastic recycling tends to be more of a myth than a reality — only 8 percent of plastics purchased ever get recycled, and most of the plastic that does will only be repurposed once before ending up in a landfill anyway. Or worse, one of the world's five oceanic garbage patches spanning thousands of nautical miles. The Story of Plastic takes Wilson across garbage patches to three continents, where he speaks to a number of experts, workers, and residents about plastics and their impact. Meanwhile, he explains how and why things have been allowed to pile up into such a desperate state of affairs — one that not only threatens other species, but our own (for example, phthalates have been linked to decreased virility and fertility).

If that sounds disturbing to you, you could be excused for wanting to talk about it. Luckily, each installment of the Film Grain Virtual Cinema Series — including this one — affords you the opportunity to do just that. Simply visit filmsocietynwpa.org and make a donation in any amount to support local film, and you will be emailed links to both privately view the movie at your leisure and join a Zoom talkback with Stiv Wilson, Monica Wilson (policy and research coordinator, associate director for the Global Alliance for Incinerator Alternatives), and Sherri A. "Sam" Mason, Ph.D. (sustainability coordinator at Penn State Behrend).

This is a chance environmentally and globally conscious locals will not want to throw away.