Shakespeare in Love: A Sure Cure for Writer's Block 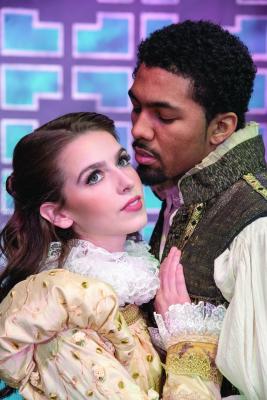 Writer's block has confounded novelists, poets, and playwrights for centuries. While it is never easy to overcome, typically inspiration has its way of interjecting itself and setting things aright.

Inspiration can, of course, come in many forms, but surely none is as exciting, enchanting, and energizing as falling in love.

The Erie Playhouse certainly believes so, and they will make you believe it, too, with their latest production, Shakespeare in Love: The Play, a stage adaptation of the wildly popular 1998 film (which won Best Picture at the Oscars) about one of the world's most famous writers and the fictionalized, imagined inspiration behind the penning of Romeo and Juliet.

Fans of the film will be pleased that the plot has stayed completely intact: Will Shakespeare, (played by Curtis Jones III), owes Romeo and Ethel, the Pirate's Daughter to two different troupes, both of whom are eagerly awaiting the script so that they can get on with production and start generating some coinage. He meets a young actor who is — surprise — a beautiful maiden named Viola de Lesseps (played by Maeve Kirby), disguised as a male so that she can pursue her love of the stage. Poor Viola is from a well-to-do family and has been promised in marriage to a pompous aristocrat with an ancient name. Obviously, Will and Viola will become passionate lovers, but their feelings must begin and end there.

Or must they? As their situation deepens, evolves and grows ever more tragic, so does Will's play.

With a cast of nearly two dozen, including four stage debuts, sumptuous costumes reflecting the Elizabethan period, and many references to the Bard's body of work, this Erie Playhouse production, set for a two-week, 11-show run, is bound to inspire even the most blocked-up of writers. — Cara Suppa