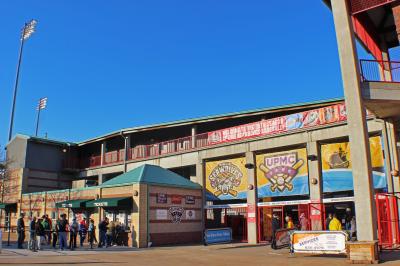 Nick Warren
A birds-eye view of UPMC Park reveals the revitalized playing surface, the first of many upgrades in line for the home of the Erie SeaWolves after being awarded a $12 million state grant.

If the game of baseball is about making adjustments on the fly, then the 2019 Erie SeaWolves season is a towering fly ball in the bright light of a sunny afternoon.

Spirits are sky high as the team celebrates its 25th season, but by team president Greg Coleman's admission, it's easy to lose sight of it in the glare of 2020 and beyond. For those who haven't been tracking this development from home, a $12 million RACP (Redevelopment Assistance Capital Program) state grant was awarded to Erie Events (the facility manager for UPMC Park, Erie Insurance Arena, the Bayfront Convention Center, and the Warner Theatre) for much-needed upgrades to the ballpark.

The first of those improvements began as soon as the 2018 season ended with a complete replacement of UPMC Park's playing surface, which is now far better adapted for regulating moisture levels with additional irrigation, drainage, and monitoring systems. The immediate impact of that? "We can play more of our games. This could shave up to an hour or an hour-and-a-half off rain delays and get us back to playing ball sooner." Contrary to their identity, the SeaWolves have never been much for swimming.

The next wave of renovations floating over Erie's plate is slated for late June. That's when two new video boards will be installed where the current ones reside — similar in dimensions, but substantially enhanced in functionality. Above the wall in right field will be a high definition LED videoboard that can be programmed just the way the team likes it — and will be ideal for hosting movie nights and engaging the community beyond baseball when games aren't being played. The auxiliary scoreboard attached to Erie Insurance Arena will be twice the height and thrice the width, thus more capable of sharing more baseball information with the crowd and getting them fired up at key moments in the game.

The biggest curveball to operations will arrive in late July, when construction begins on a four-story building in the corner of left field. The building will house year-round team stores and administrative offices for both the SeaWolves and Otters, the 'Wolves ticket office, and a stadium club on the fourth floor overlooking the field with accommodations for up to 230 guests. The Park Picnic and Beer Gardens, restrooms, and suites are also due for overhauls within the next few years.

"When people walk into the ballpark at the start of 2020, it's going to be very different," Coleman says. That includes where fans enter from, as the gates will be relocated to near the foot of East Ninth Street in closer proximity to Erie Insurance Arena. For those waiting to get into the park now, Coleman suggests downloading the new mobile ticketing app and skipping the lines.

As for what fans will be walking into this year, Coleman sums it up as "a little old, a little new." As per usual, there will be giveaways on Fridays, fireworks on Saturdays, and on Sundays perhaps the best deal of all — the Giant Eagle Kids Crew, a free-to-join club for children 12-and-under that includes an ID card good for free admission to all Sunday home dates. "When they issue birth certificates in Erie County, they should issue Giant Eagle Kids Crew memberships with them," Coleman jokes.

Coleman says that the team is "not re-imagining the menu" yet with the all other upheaval due to descend upon the park, but there are a few new additions to the concessions offerings. The most notable of these is a BBQ stand called the Feisty Pig, whose signature item is the PitMaster platter, a hoggishly hearty meal which includes pulled pork, BBQ chicken, Mac 'n cheese, potato salad, and cornbread. Founders and Southern Tier have joined the beer rotation, and Arundel Cellars is partnering with the team and will introduce the official wine of the SeaWolves on April 25. The Reader presumes it'd pair brilliantly with last year's infamous cotton candy hot dog.

Speaking of novelties, the 'Wolves will not be sheepish about their clothing options this season. For four home games this year (May 5 vs. Bowie, June 18 vs. Portland, July 28 vs. Trenton, and August 13 vs. Reading), the team will undergo a total makeover, refashioning themselves as the Erie Piñatas in tandem with Minor League Baseball's Copa de la Diversion Hispanic cultural initiative. These games promise to be "bright, colorful, loud, and fun," according to Coleman. If you catch a glimpse of the Piñatas logos and uniforms, you'd be inclined to believe him (milb.com/erie/fans/copa). Throughout the season, the team will mix-and-match from its wardrobe past, with jersey giveaways to the first 1,000 fans on May 24 (2001-10 uniform), July 12 (1999-2000 uniform), and August 16 (1995-98 uniform). On Throwback Thursdays, the team will wear a powder blue mashup between their '95 and current looks (and also rewind pricing of a select item at the park to its 1995 mark).

The All-Star of the promotional calendar, however, is the SeaWolves 25th Anniversary Celebration on July 27, a "homecoming" for past employees, players, and architects and builders of the original Jerry Uht Park. The first 1,000 fans that night will receive a card set of the SeaWolves All-Time Team, which was selected based on their votes. Players have come and gone, but an afternoon or evening at the park has remained a "howl of a good time" for as long as the right field wall is short. For the complete schedule and list of promotions, visit milb.com/erie

Despite his heroics as a former Little League walk-off walk game-winner, Matt Swanseger suspended a promising baseball career to become a writer. Send your condolences (but please don't hit any balls) his way at mswanseger@eriereader.com