Since 2017, piping plovers and common terns have made themselves a home at Gull Point 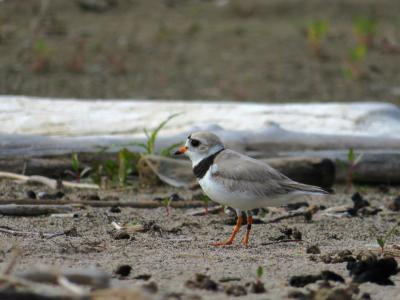 On April 18, I ran into an old friend on the shores of Gull Point at Presque Isle State Park. We've only known each other for seven years, but it feels like a lifetime. This friend, a shorebird called a piping plover and nicknamed Jerry, arrived there in 2016 and has returned every spring since. He is now considered a "pioneer" bird, the one who established the first nest in 2017 and has gone on to father 15 chicks in subsequent years. In the intervening years, these birds, along with state-endangered common terns, have kept us busy and our hearts full. As we learn more about each species, we have come to expect surprises, both delightful and heartbreaking. 2022 was no different.

Since Jerry and his mate had their first nesting success at Gull Point in 2017, there's been a lot of water under the proverbial bridge for the Great Lakes population of piping plovers. The fortunes of these federally-endangered birds have ebbed and flowed along with historically high water levels in the Great Lakes over the past several years. For example, in 2017, when water levels were lower, the number of fledged chicks in the wild was 96, and grew to a hefty 124 in 2018. But, it dropped again in 2019 and plunged to just around 87 chicks in 2020, which saw the highest levels of water inundating traditional nesting sites across the basin.

Now the water has receded and fledge numbers are rebounding. Across the Great Lakes this year, there were 72 recorded pairs of nesting birds and 150 chicks fledged in the wild, a banner year for chick productivity. Here at the park, our plovers, since 2017, have contributed a total of 27 birds to that population.

Gull Point's plovers added to this year's yield with an exciting first. Rather than hosting a single nesting pair, Gull Point had two pairs of piping plovers nest there for the first time. Our stalwart Jerry had a nest with one female, and, interestingly, the second nest was fathered by his son from 2021. From those two nests, seven chicks hatched, but only five would be recorded as fledged due to assumed predation. Still, a great success.

Other developments brought even more surprises, though. Jerry, now a veteran breeder, acquired a wandering eye last year, attempting to nest with every available female around. He continued those ways this year with two additional unmated females. In an unusual occurrence, both females laid their eggs in the same nest. When a PA Game Commission biologist did a check, he found a nest with seven eggs in it, a sign something suspicious was going on, since a typical nest has three or four eggs.

It was determined that those seven eggs were in peril because plovers are not large enough to successfully incubate that number of eggs. Plus, Jerry already had four eggs in a nest with the first female to which he needed to devote his time. As a result, the seven eggs were collected and transported to the captive rearing facility in Michigan that is operated by the Detroit Zoo in conjunction with the University of Michigan. There, four were considered viable and went on to hatch and fledge in Michigan. In all, Erie in 2022 contributed nine plover chicks to the imperiled population.

Their neighbors at Gull Point, the common terns, have not had the success the plovers have seen, but they are still making an attempt. Common terns are colonial birds which means they like to nest in groups that provide increased security. In recent years, the Gull Point common terns have attempted a small colony, but the eggs were taken by predators or storms before hatching. This year, only one pair attempted a nest and they successfully tended it until the eggs hatched, a first since at least 1966 when historical nesting was last recorded. For a short time, we were thrilled to get glimpses of tern chicks being fed or toddling around their doting parents. That delight did not last, however, and no chicks were seen after June 25.

Since 2017, I have been with these birds each year from April to August. I've blown through five or six pairs of water shoes, had to replace a deteriorating backpack and ragged hat, and I've walked approximately 2,500 miles on my daily circuit. I also now sport a likeness of my dear friend, Jerry, on my left ankle, inked there to remind me how lucky I am to have gotten to know him and his fellow shorebirds.

The exhilarating highs and the discouraging lows of the season will inevitably continue next year. We will be on the sidelines again, with fingers crossed and hearts ever hopeful.

Mary Birdsong can be reached at MBirdsong@eriereader.com

The creation of Erie Bird Observatory

The intervening years have produced a few changes for the human part of this equation, too. In 2017, my employer was Audubon Pennsylvania. As we were celebrating our 2017 nesting milestone, however, Audubon was making plans to close the Northwest PA office, leaving my job and a few others' work in jeopardy. To continue the research and monitoring we were committed to, Sarah Sargent, 40 Under 40 honoree Laura-Marie Koitsch, and I created a new nonprofit, Erie Bird Observatory, in 2018. EBO now operates the bird banding station at Presque Isle, monitors nesting marsh birds, continues the shorebird monitoring, which includes the piping plover and common tern recovery programs, conducts other avian research, and offers educational outreach to the community.