Sky's the Limit for Dramashop 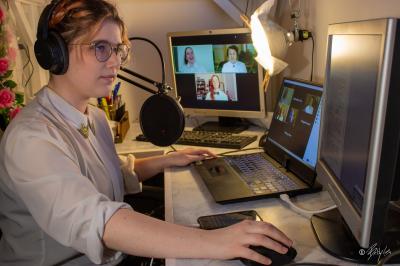 Erie's Dramashop refuses to let COVID-19 steal the spotlight as they continue their latest production in an online capacity. The cast members will be performing live from their own homes, livestreaming four online-only performances.

Director Britty Lea said the online performance is a great opportunity to share the local artistic community with everyone, even if they aren't local.

"There's a line in the show that says, 'Afar but not apart' and I think that's really important right now," Lea commented. "Even though we are apart from each other physically, we are not apart in the community."

The show is Silent Sky which tells the story of a woman "computer" working at the Harvard Observatory for a renowned astronomer in the early 1900s. The true story of Henrietta Leavitt (played by Hannah Richardson) explores her experiences and challenges as a woman in society at the time of immense scientific discoveries and little social progress.

Sparking the discussion of women in physics, Silent Sky explores themes of feminism and bigotry in history, while provoking thoughts of intellectual ability and life beyond the stars.

Just like Henrietta faced challenges, the cast of Dramashop has too and Lea emphasized that, "Just because it's a challenge doesn't mean we haven't given it 110%; and everyone should watch the show."

Live streaming will be provided by local company Grise Audio Visual. However, the livestream will be private and only those who make a donation of $1 or more will be able to receive access. There are a limited number of "seats" available, and Dramashop encourages the audience not to wait until the last minute to purchase tickets.