Slide In the DM

How local Dungeons & Dragons players are rolling for their own initiative 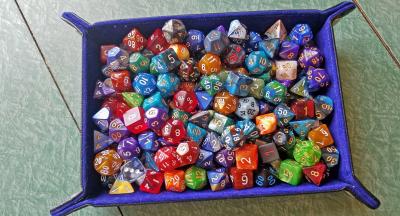 The tabletop role-playing game (RPG) Dungeons & Dragons has been around for decades, originally invented in 1974 by American game designers Ernest Gary Gygax and David Arneson. At first, it gained an unfortunate reputation for having a very niche and therefore limited target audience. It even stirred up a panic amongst conservative parents that it would cause their children to lose touch with reality, resulting in some rather unfortunate films being made which will not be mentioned by name.

"It was very much a 'niche of a niche,'" Steve Holoweinko of the Griffons Lair Game Shop LLC remarked when discussing the initial controversy the game met when it first came out. "People didn't even admit to playing it." The truth is, the game is just fun, and anyone can play it — writers, actors, book-worms, tech whizzes, gamers, even amateur stand-up comedians. "There's a lot more female players now, and there's a lot more older people playing with younger people," Holoweinko added. As web series/podcasts like Critical Role gain increasing popularity, more attention is being brought to the game.

"Transitioning into fifth edition, it's a lot more welcoming to people who didn't come from an RPG background," Sarah Bell of Gateway Games pointed out. That being said, for those still looking for a safe but fun hobby, consider joining an existing group, or creating your own original campaign. With computer programs like Roll 20, Discord, and the Tabletop Role-playing Game (TTRPG) Safety Toolkit that allow players to participate online, social distancing is not an issue, nor is finding a t-shirt with just the right obscure reference to wear to game night.

Kate Copp, of GeekErie, has been getting younger people into the game through remote sessions that used to be held at the library.

"We continued using Discord during the pandemic," says Copp. "Having the ability to video chat, and home delivery services being able to deliver dice and maps, it's been really great to have that in times where we can't get together as a group." Britty Lea, who is one of the players in the delightful D&D podcast No Dice, has been playing with a group for three years, with no members living in the same state.

"We use Roll 20, it's a fantastic resource. You can look through supplemental books on the site. What's really nice about it specifically is you don't have to be as well-versed. That's how we started learning it more in depth because all the information is there when you play." Additionally, Lea discussed how the TTRPG Safety Toolkit contains guidelines for how players can all feel comfortable playing together. It outlines the importance of communication, trust, and boundaries amongst group members, so everyone is having a good time.

RPGs like Dungeons & Dragons present people with endless opportunities to express themselves as either a player or the creator of a campaign (dungeon master). As a player, a person can create their own character that can look, sound, and act however they wish (now is the time that all those Monty Python marathons might come in handy for developing an outrageous accent). They even have the option to create an elaborate backstory. "Now players have the chance to play a shape-changing cat person," Holoweinko laughingly explained when mentioning the different types of creatures a player can be.

As a dungeon master (DM), one can create an entire world for the players to explore, adventures for them to go on, encounters with strange characters, and monsters for them to defeat. These monsters can be chosen from the wide selection in the Monster Manual, created from the DM's imagination, or even based on characters in pop culture. "They may take lore that's already in the D&D universe and work it into their own world," noted Bell. The concept of creating one's own world for an RPG is known as homebrew. Something few people realize is that a Dungeons & Dragons campaign does not require a dungeon or even a dragon. RPGs can take place in a wide variety of universes — a magical kingdom, on board a spaceship, or in the midst of a zombie apocalypse to name a few. "You really can do anything, which is the cool part of it," says Holoweinko. "Someone putting together a homebrew game can be better than any module."

Be warned, this game does have potential to lead to an expensive habit ... dice hoarding. That's right, they don't just come in different colors; creative craftsmen make and sell sets of dice one could only dream of. "All RPG players are dragons, but instead of treasure and gold, we hoard dice," Bell joked. She noted that her preference was for dice on the sparkly side. Lea favors a set of her own that appear to have stars in them. Holoweinko loves the weight of his metal dice on the gaming table. Copp has a lucky set known as blood golem dice, and mentions that the kids she works with likely have over 200 sets of dice between them. Some are filled with glitter, flowers, and skulls, some are made from crystals, some are made like little snow globes. The possibilities are endless, and it is addicting and fun. However, fear not if money is scarce. Roll 20 has a free dice program, so until that perfect set comes along, players still have access to the tools they need.

Starting a game like this actually becomes a more fulfilling experience than one would expect. Players working together towards a goal in a fictional setting as different characters can be viewed as quite the team building exercise. "It's a collaborative storytelling experience; that's what really interested me about it," says Lea. Copp recalled that the kids who participated in the GeekErie sessions benefited greatly from working together through the game. "They have times where they don't agree with each other and they've worked it out through the story. It's helped them become leaders for each other in ways that are non violent." Alternatively, it creates a form of escapism, giving a player the chance to just immerse oneself in a new world and act in a way they wouldn't in the real world. Lea charmingly observed, "It's that same energy of when you were seven and picked up a stick and it was suddenly a sword."

For the dungeon master, a person has the chance to see what is important to them when being in charge of the game — how much control they like to have and whether they can improvise. "I didn't know how well I'd do as a DM. The game itself has helped me; it gives me no choice but to lead. You have these adventurers that need you. It does push you," Copp says. "It's helped me not only in D&D, but in my personal life. It's taught me patience and objectivity. I've always been a black-and-white person, and I never explored the gray."

She makes a great point. The skills one needs in an RPG campaign are those that can be applied in the real world. Bell observed too that "you can use everything you do for D&D when writing your resume." Campaigns can get deeper than most would expect, depending on how much people like to role-play. Characters might establish relationships with each other that grow and develop as the game progresses, making the stakes of battle all the more stressful.

It's certainly an option that might make quarantine a little less monotonous.

Claudia Rose recently wrapped up her first campaign as a Dungeon Master (with Reader Managing Editor Nick Warren as one of the party members). The final boss was killed by a goose, but that's another story. Claudia can be reached at Claudia@eriereader.com