Some May Want to Check Out Early from Cecil Hotel 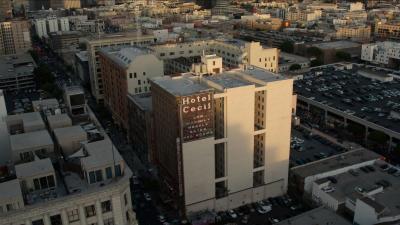 In early 2013, Canadian student Elisa Lam was vacationing in Los Angeles when she went missing from the infamous Cecil Hotel downtown. For almost three weeks, authorities had nothing to go off of except for an eerie, 4-minute elevator surveillance video depicting Elisa acting strangely in what was likely her final hours. Following complaints from other guests about the pressure and color of water in the rooms, hotel maintenance checked the rooftop water supply and discovered Elisa's body and belongings inside one of the tanks. Police were called and an investigation ensued from both the LAPD and a group of online sleuths who took an interest in Elisa's case.

Headed by true crime documentarian director Joe Berlinger (Brother's Keeper, Conversations with a Killer: The Ted Bundy Tapes) and executive producer Ron Howard, Crime Scene: The Vanishing at the Cecil Hotel is a highly anticipated look into the mysterious disappearance and death of Elisa Lam. The series, however, falls short of viewer expectations.

In something that would have done much better as a shorter documentary, the series' four episodes — each almost an hour long — shifts focus constantly, causing the series to feel like multiple documentaries haphazardly thrown together. Although Elisa's story is billed as the main focus of the series, too much time is allocated to the history of Skid Row, the online sleuths trying to "solve" her case, and the conspiracy theories that surround her disappearance and death. The abrupt jumps between these varying storylines contribute to the haphazard nature of the series, feeling less like a finished product and more like someone's jumbled thoughts that have yet to be ironed out.

The series is not without a small amount of merit, though. Elisa's story is nothing if not tragic, and Berlinger treads respectfully in regard to her struggle with bipolar disorder. The series interviews Dr. Judy Ho, a board-certified and licensed clinical and forensic neuropsychologist, who addresses how Elisa's bipolar diagnosis was a likely culprit in the erratic behavior she displayed in the days leading up to her death. Berlinger pulls from Elisa's Tumblr page — Nouvelle-Nouveau, which is still online and accessible via the blogging platform — to both humanize and explain her mental state in the weeks and months before her trip to Los Angeles.

Overall, the series misses multiple opportunities for success. It is obvious that the best intentions were in mind when it was created, but it dedicates too much time to other storylines, making the most important story — that of Elisa Lam — feel secondary at best. — Ally Kutz