The Playhouse debuts Something Rotten! for the first time in community theater 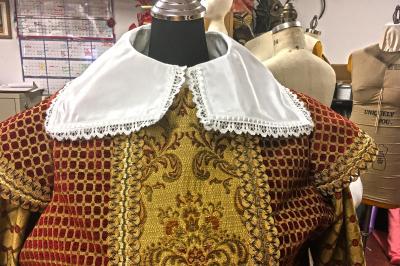 NOTE: THE OPENING WEEKEND OF SOMETHING ROTTEN! HAS BEEN CANCELED.

When Shakespeare said "Brevity is the soul of wit" he might as well have been referring to Something Rotten!, the musical comedy that premiered in 2015, but is set in 1595. The story follows brothers Nick and Nigel Bottom as they try to write a hit play in the shadow of the greatest bard of all time, Shakespeare. With help from a soothsayer who foresees the future of theater, Nick and Nigel set out to write the world's first musical.

Something Rotten! was nominated for 10 Tony Awards, including Best Musical, and the Erie Playhouse is the first community theater in the nation to bring it to the stage. They were granted early access by the licensing agency and since Something Rotten! is a brand new show, there aren't any previously used resources for the Playhouse to rent from other theaters. This means that their production team worked diligently on the costumes, sets, and backdrops to make sure the show is up to the high standards that the community expects from the Playhouse.

Executive director Kate Neubert-Lechner said, "The show is a hysterical skewering of musical theater and Shakespeare, while being a complete love letter to both at the same time. It truly is one of the funniest shows to be produced on Broadway in the last decade and has something for everyone — romance, comedy, huge musical numbers, and tap dancing eggs."

Something Rotten! is rife with references, as they take you through a journey of not only Shakespeare, but other hits including South Pacific, The Phantom of the Opera, and The Lion King. With songs like "God, I Hate Shakespeare," "Hard to Be the Bard," and "Make an Omelette," you are sure to be singing these numbers long after the curtain call. — Larry Wheaton