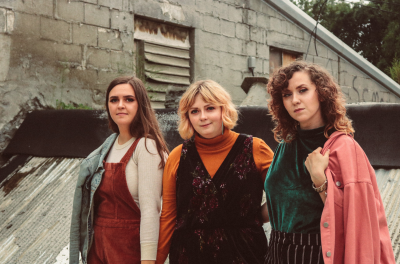 The self-proclaimed spooky-folk band Blue False Indigo takes the stage at Artlore Studios Wednesday. Hosted by The Andromeda Agency, the event will feature Blue False Indigo along with The Burkharts, Spades and Roughbeast, Nick DiNunzio, Melancholy_* clothing, and food vending by A Waffle Miracle.

Blue False Indigo is a trio from Kansas City, Missouri. They formed at a small liberal arts college and have spent the past five years cultivating their sound, one that is vocal-heavy with minimalistic instrumentation. Their harmonies are interwoven to create a sound that cuts to the bone, along with themes that ring true with the audience.

They have been described as "mysterious" and "hauntingly cathartic." Blue False Indigo released their debut album More Light in September of 2018.

Their stop to Erie is part of their 2019 Northeast Spooky Tour in anticipation of their new record, being released Oct. 31.

The Burkharts are an eclectic five-piece alternative rock band from Buffalo, N.Y., who will be playing along with Spades, Roughbeast, and Nick DiNunzio to round out the event.

Food truck A Waffle Miracle will be there serving up hot waffles for customers. — Chloe Forbes