In one Erie city food desert, volunteers and residents are creating solutions. 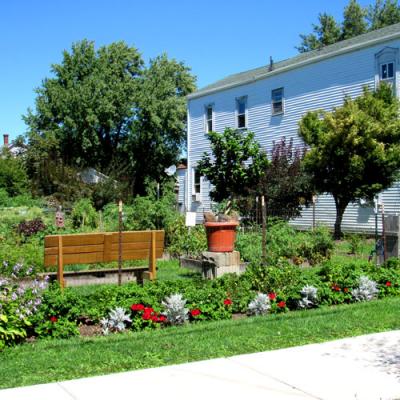 For the Sisters of St. Joseph Neighborhood Network (SSJNN) and the nearly 70 volunteers who plant, maintain, and harvest fruits and vegetables at five community and urban gardens, growing produce within the city limits is about more than just adding water to seeds. The work SSJNN has done reaches beyond the goal of bringing fresh food to one of Erie County's 10 food deserts (four of which exist within the city of Erie). As residents work together to keep the gardens viable throughout the growing season, there is a sense of camaraderie and fellowship.

"I like how many different things the gardens do for the community," says Sister Phyllis Hilbert while walking the short distance from the Neighborhood Network home at 425 West 18th Street to the 17th and Myrtle streets urban garden. "They improve the look of the neighborhood, they give kids and residents something to participate in, and we get so much fresh produce from them."

The idea for the first garden – the International Flavors Community Garden across from the Neighborhood Network house – arose in 2010 as part of a collaboration with the former Irving School CHAMPS after-school program. After receiving a grant from the Pennsylvania Department of Education and a land donation from Larry Adiutori, the project became a reality. With the help of Sister Phyllis and others at SSJNN, volunteers and residents of the Little Italy neighborhood used the "It takes a Village" approach to build raised garden boxes and begin the process of growing juicy red tomatoes and bright, crispy green peppers in the city.

Since then, this SSJNN program has grown from a single lot to five separate gardens in the Little Italy area. According to Sister Phyllis, it is the "Gift of Gary" that keeps the gardens growing every year.

"I had just moved to town," said Gary McEnery, coordinator of the SSJNN community and urban gardens program. "I attended a few neighborhood meetings with the intent of just listening. One day, Sister Phyllis asked for someone to coordinate a new program for community gardens … and, well, I raised my hand. That was when it was one small garden. Now it's five."

Running five gardens from February until the ground freezes in autumn requires much more planning and effort than most people realize. In addition to many volunteers, SSJNN employs seven youth workers to encourage community involvement and teach them about gardening and, in some respects, how to run a business.

Once Luther turned 18 and could no longer hold a youth position at SSJNN, he went to work for the Whole Foods Co-op on West 26th Street.

"Working at the Co-op now is awesome," says Luther. "The whole idea is to provide good food. Working in the gardens gave me an appreciation of that."

As Maxim Dyachkin, one of this year's youth workers, can attest, helping with the gardens not only teaches kids how to grow good food; it also shows the business side of getting food to the table. Every Monday by noon, Dyachkin and his volunteer mentor, Barbara Kantz, arrive at the 19th and Myrtle streets urban garden to pick, clip, and bundle vegetables for the farmers market in the lot adjacent to St. Paul's Community Center on 16th Street. As Dyachkin sets up a work station of sorts on a picnic table in a shaded corner of the garden, Kantz is already pulling yellow squash from a flowering vine nearly as tall as she is.

"I'm here because of an ad requesting volunteers to help with gardening," Kantz says. "I'm an avid gardener and I'm so hooked on the work the sisters do here. They have the best community of service-oriented volunteers and I just love it."

Kantz then calls out to McEnery, who is always somewhere near a garden, about how wonderfully the "long, thin peppers" and the "tiny, hot ones" are growing.

On the south side of the garden, Dyachkin cuts beets and bundles four or five at a time with rubber bands before dropping them into a blue plastic laundry-basket-turned-market-basket. By the time he finishes, the basket is heavy with root vegetables and overflowing with late summer's dark leafy greens.

With every business comes trials and challenges, and these lush green gardens do not reveal the difficulties of gardening organically in a dry summer. To prevent hardship during droughts, volunteer Dave Durney built a 300-gallon, six-barrel rain catch system connected to seep-hoses – garden hoses with holes poked along their lengths – throughout the rows of vegetables.

"But we still ran out of water," McEnery says. "A neighbor let us run a hose from her house across the street and water the garden for weeks."

As the gardens grew, water was not the only challenge McEnery and the network had to overcome. While planting Namaste Garden near 18th Street on Sassafras Street, language presented a barrier to communication.

"The boxes are adopted by Bhutanese refugees," McEnery explains. "I had gathered seeds for all kinds of vegetables and herbs, but the residents adopting the garden boxes couldn't read the English words on the packets. So I pasted pictures of each seed's plant on an envelope with the seeds," he laughed. "As it turned out, they didn't need the pictures, anyway, because they use a unique planting method of scattering all the seeds together."

Each plant in each box grows beautifully where it's planted; in a way, the Namaste Garden represents the same eclectic nature that Little Italy now does.

At first sight, scattering seeds seems to function in contrast to Sister Phyllis' vision for neatly-rowed cabbage plants and apple trees; but the method works, nonetheless. In one box, dill and parsley share space; in another, a lone corn stalk shoots straight up through the leaves of a squash vine. Each plant in each box grows beautifully where it's planted; in a way, the Namaste Garden represents the same eclectic nature that Little Italy now does. And as it turns out, both diversity and aesthetics are good for a community.

In a "Soul of the Community" study conducted by the Knight Foundation in 2010, researchers found that aesthetics and openness (a community's welcoming nature toward new and different people) are two components that help community members connect emotionally to their surroundings. The study interviewed 43,000 people in 26 communities across the U.S. over a three-year period.

Is it coincidence that the study was published during the same year that SSJNN developed the first garden? Those familiar with the Neighborhood Network and the community work they do would probably say it's a simple matter of looking around the community and identifying needs. McEnery is one example of someone who always seems to know when the gardens or the neighborhood needs a little something extra.

"We were growing all these beautiful vegetables and I realized there was sometimes a disconnect between the garden and the table," McEnery says. "So I had some neighbors over for spaghetti one night. I didn't just want them to try it – I wanted them to recreate the meal. I made packets with all the necessary ingredients and provided everyone with the recipe." As he tells the story, McEnery pulls a handful of black cherry tomatoes from a staked plant nearly six feet tall and pops an almost black tomato into his mouth.

"Everyone should get to experience the juicy explosion of a tomato fresh from the garden," he says, smiling.

Around 2:30 p.m., Kantz and Dyachkin load their heaping baskets into a truck to transport the produce to the market, mere blocks away. As they set up the table, Dyachkin, referred to by Kantz as an "entrepreneur in the making," makes several trips around the table to make sure every vegetable is clean and looking good.

Laurel Honey, a regular shopper at the Little Italy Monday afternoon farmers market, stops by the SSJNN table to browse the latest urban garden crop. She travels here from Waterford not only for the freshness, but also to support SSJNN's efforts to provide fresh produce to a food desert area of town.

"The market gets food into the city where it is so needed," Honey said. "There's really only the corner store here with white bread and milk. The fact that residents can double their money with the vouchers is just so nice."

Those vouchers are handed out to low-income senior citizens and single parents with children. After using the vouchers at one of the farm stands at the market, recipients then receive tokens of equal value to cash in for more produce.

Perhaps Luther put it best when he explained why working with the SSJNN gardens means so much to him.

"Gardening is a good time, but most importantly, it's cool for everyone in the neighborhood. It's just a positive thing the whole way around."

For more information about SSJNN and their projects or to volunteer, visit ssjnn.org.