It doesn't matter how you get to Kings Rook the evening of March 18th, it only matters that you get there. 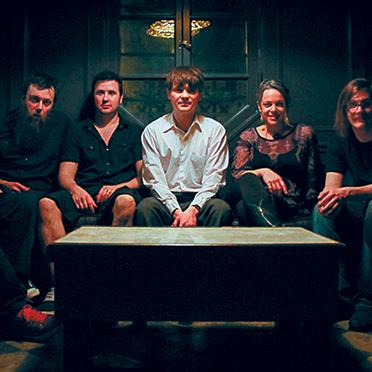 Stop Making Sense epitomizes the distinction between cover and tribute band – they don't simply show up to rehash the Talking Heads' greatest hits; they've immersed themselves so completely in their source material so as to become the Talking Heads.

It doesn't matter how you get to Kings Rook the evening of March 18th, it only matters that you get there (just bear in mind that hijacking is a federal offense). Because once you hear Start Making Sense perform, the point will be moot. The group epitomizes the distinction between cover and tribute band – they don't simply show up to rehash the Talking Heads' greatest hits; they've immersed themselves so completely in their source material so as to become the Talking Heads.

Lead singer and guitarist Jon Braun is as masterful an actor as he is a musician – he absolutely nails the role of (Heads frontman) David Byrne. His high-strung delivery, twitchy choreography, bugged-out facial expressions, and overall manic energy lend an authenticity to his performances few could hope to rival. Fellow band members Jon Fadem (lead guitar/backing vocals), Bill Melcher (bass), Jesse Braun (drums), Steve Brunette (percussion/backing vocals), Brad Murray (keys), and Kathleen Weber (backing vocals) also demonstrate dynamic range. After all, the Heads catalogue is one of staggering diversity – from the art-punk of their debut album Talking Heads '77, to the funk and world music leanings of their middle period (1980's Remain In Light, 1983's Speaking In Tongues), to the more straight-ahead pop rock of their later years leading up to disbandment (1985's Little Creatures, 1986's True Stories).

That ranginess will be on display prior to the main event when many of the same band members take the stage as HmfO, paying tribute to the legendary blue-eyed soul duo, Hall and (mf'in) Oates. Say it isn't so!

No, it's not quite the same as it ever was – but you can bet they'll be burning down the house just the same. – Matt Swanseger