Congressional Republicans don't want a State of the Union. The President should give them what they want. 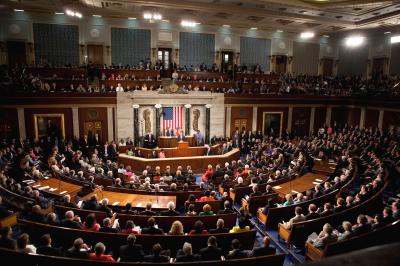 Earlier this week Rep. Paul C. Brown (R-GA) called for House Speaker John Boehner to withhold the congressional invitation to President Obama to deliver the State of the Union address.

If this is any indication of what the next two years hold, we're in for a long cantankerous ride.

Congressional Republicans argue that this is presidential punishment for Obama's executive action on immigration.

Boehner claims that he won't withhold the invitation, which is a traditional gesture extended from Congress to the President in order for the President to carry out his constitutional mandate to update Congress on the State of the Union.

The fact that this petty option became part of the national conversation on political action illustrates the shallow depths of Republican leadership and lifts the thin veil on what little substance congressional Republicans will bring to the table in the next term.

We get it. Republicans are angry about immigration policy. Obama's initiative is illegal, they claim.

Yet, rather than sue the president over his executive action, they filed suit against the administration for provisions of the Affordable Care Act, many of which have already been validated by the U.S. Supreme Court.

It's as if Republicans know that President Obama has effectively used the law to forward the progressive, controversial part of his agenda. Lacking the ability to truly enact change, they have taking to poor-form public relations.

At a press conference on Thursday, Boehner derided "a White House that regards the legislative process established by the Constitution as little more than a nuisance."

But the Speaker seems to forget that the legislative process begins in the Congress and that his House of Representatives is responsible for initiating some of that legislation.

Congressional inaction has led to executive action, not the other way around.

Now as Republicans continue to lament Presidential action that they can't seem to keep pace with, they will again attempt to distract the American people with threats of withholding the President's invitation to address Congress. Some Republicans have even suggested that the President simply put the State of the Union in an email, rather than making a speech.

Imagine their outrage if, invitation extended, the President declined, sent them an email at 7:59pm and took to prime-time TV from the Oval Office at 8:00pm to address the American people.

Since they don't have a very good poker face, maybe Obama should just call the Republican bluff.