The Predator Works Better as Comedy than Action 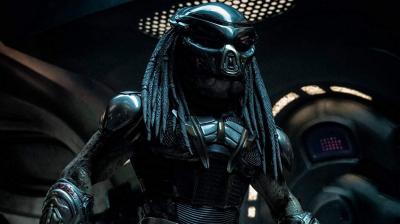 John McTiernan's 1987 film Predator is really the most ingenious idea for a film: an action movie that suddenly gets hijacked by a slasher flick halfway through. Thirty years later, dozens of filmmakers have tried to emulate that premise but Predator still stands as one of the greatest action/horror hybrids ever made. To his credit, director Shane Black (Iron Man 3, The Nice Guys) doesn't try to copy McTiernan's original in his new sequel The Predator. Instead, he almost turns the film into a kind of screwball comedy.

This new film begins with the lovable alien hunter crash landing on Earth after being pursued by other, stronger Predators. This Predator and his pursuers must then track down a young boy who has accidentally stumbled onto some of their technology and only a motley crew of ex-soldiers stands in the path of the extraterrestrial killing machines.

The film is filled with Shane Black's trademark witty dialogue and zingy one-liners, most of which are really funny. All the characters are also surprisingly well-developed and sympathetic and there are even a few clever callbacks to lines and scenes from the original movie. Ironically, the film's biggest weakness is its action scenes which are clumsy and poorly edited with characters that seem to appear like magic several times (it seems there may have been some studio meddling during the editing process). The funny character interactions briefly elevate the film during the first half, but once the (admittedly delightfully gruesome) killings start, The Predator shows you how truly mediocre it can really be. — Forest Taylor

by Forest Taylor9/26/2018, 10:30 AM
Assassination Nation is the Darkest Film of the Year
The PredatorShane BlackClassic Film RemakeFilm Review