Stirring Up Memories with Pink Martini

Talking to pianist Thomas Lauderdale on his musical journey 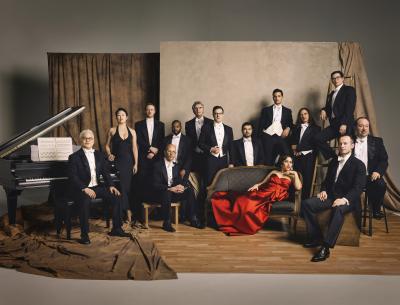 As his group, Pink Martini, continues to tour behind its latest album, Je dis oui!, frontman/pianist Thomas Lauderdale sounds downright astonished that he still gets to follow his musical inspirations and make a living in the process.

"We've been going for 22-plus years," Lauderdale said, reflecting on his Pink Martini journey during a recent phone interview. "On paper it's preposterous; it seems so implausible for a band playing this kind of music and traveling the world for 22 years would actually be able to function. But here we are. We're very lucky."

The musical niche Lauderdale and Pink Martini have carved out is indeed unlike any other in pop music. The group's music traverses a spectrum that takes in vintage and contemporary pop, jazz, classical and a range of international styles. The songs are sung in a host of languages — with Je dis oui! spanning eight different languages. The musical mix begins to make sense when one learns a little about Lauderdale's background and upbringing.

"I'm the oldest of four adopted children. My parents were white, but they adopted a multi-cultural family," he said. "My father went back and forth between being a minister and being a plant nurseryman. So I spent a lot of time both in the church and also growing up on a plant nursery in Indiana. After church services, I would go up to the piano and pound out the hymns that I had heard during the service. My parents sort of took it as a sign. "So I started piano lessons when I was six," Lauderdale said. "There were sort of six things that really were my childhood soundtrack. They were Ray Conniff, Ray Charles, Roger Miller, the New Christy Minstrels, the Mormon Tabernacle Choir and the soundtrack to Jesus Christ Superstar. That was my childhood. That coupled with the fact that I studied a couple of different languages and classical music and also loved show tunes, from the likes of Rogers & Hammerstein. Those are the influences. And what you get really is Pink Martini from all of that."

Lauderdale did not initially see music as a career option. After attending Harvard University, he moved to Portland, Oregon and had an eye on a future in politics. "I was working at city hall when I was in high school and even throughout college and beyond college," he said. "My goal was really to become mayor of Portland. That was my hope."

As part of his preparations to perhaps run for office, Lauderdale started attending fundraisers for various political campaigns and progressive causes. He noticed the musical groups hired for these events left a lot to be desired. He saw that as an opportunity to put his musical background to work and formed Pink Martini in 1994 to perform at these events.

Soon Lauderdale's political ambitions began to fade and he started envisioning a future for Pink Martini that went beyond playing fundraisers. In 1997, Pink Martini released its debut album, Sympathique. The album caught on internationally, and in France the group was nominated for best new artist and the title song was nominated for "Song of the Year" at 2000's France's Victoires de la Musique Awards.

Since then, nine albums have followed (including a 2010 holiday release, Joy to the World). Now, as the group tours behind Je dis oui!, Pink Martini has built a catalog that boasts several gold albums and total album sales of more than three million.

Je dis oui! ("I say yes" in French) figures to continue to build on the group's accomplishments. It features a lively global pastiche of original songs (three of which come from the soundtrack to a soon-to-be-released film, "Souvenir," featuring French actress Isabelle Huppert) and outside tunes ranging from Cole Porter's "Love For Sale" to "Kaj Kohla Khan ("The Tough Guy with the Crooked Hat"), a song made famous by the popular Iranian singer/actress Googoosh. Lauderdale considers Je dis oui! a particularly cheerful album that reflected the positive place he and the band have reached in life and their musical journey.

"I'm happier than I've been in years. I feel pretty comfortable in my life (right now)," Lauderdale said. "So that's reflected in the music. It generally comes out in the music. Also, I mean, walking into the studio, just listening to the songs we were going to record and had the rights to record them and the band was pretty well prepped, so there wasn't a lot of learning on the spot. It was just, it was more of a reflection of music we had been working on and developed." Lauderdale said fans can expect an eclectic and entertaining evening of music at Pink Martini's shows this fall.

"The shows these days are sort of like the greatest hits plus material from the new record," he said. "There's a lot going on always at these Pink Martini shows. It's always moving, so hopefully nobody will leave feeling unsatisfied." —  Alan Sculley