Although they can resemble a circus at times, primary elections are your best chance to make a difference as a voter. 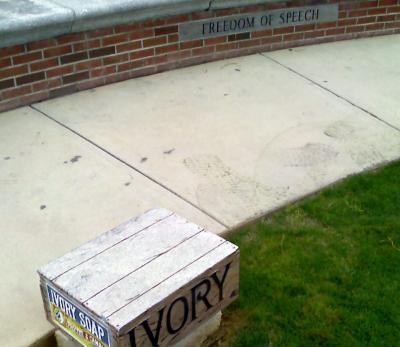 The filing deadline for office in Pennsylvania has come and gone, and the final list of candidates is settled. Besides the familiar names of the Republican presidential primary, a number of folks jumped into races relevant to Erie. Five Republicans and a Democrat vie to challenge Bob Casey for US Senate. Three Democrats fight to run against Mike Kelly for Pennsylvania's 3rd Congressional district. Five Democrats and one Republican leaped into the race for the state assembly's open 49th state senate seat, soon to be vacated by Jane Earll. And two Republicans and one Democrat are scrapping to replace the departing John Hornaman for the assembly's 3rd house seat.

It's a mess. A great, big jumbled mass of candidates and platforms and positions and speeches and literature is going to be vying for your time and attention -- and with little help from the media, what with the plethora of candidates and a presidential race brewing and Brangelina to track.

But here's the thing. The rest of the year, you gripe about the lack of good candidates for office. I know this for a fact: I hear you grousing in the diner, at the bus stop, waiting to pick up your kids from school. There you are, saying, yes, well, it's the lesser of two evils. And some of you even pine for a third party. Give us more choices! you cry to the heavens, hands balled into fists.

We don't need more good candidates for office. We don't need a third party. We need you to participate in the primary.

After all, it's in the primary where you have the greatest choice, and the greatest range of viewpoints. Twenty candidates for four offices? There's no time like the present to learn about them all and pick the four best.

And it's in the primary where you have the greatest chance to have say in the election. It's the place where your vision can most shape the government. That's because voter turnout is extremely low for primaries. Only 24 percent of registered Democrats, for example, turned out for the 2010 primary election. A few dozen votes one way or the other can mean a great deal in a local election -- and you can be one of those votes. Or better, you can get those votes to the poll yourself by knocking on doors for your candidate.

Yes, it means doing extra work. You'll have to get to know these people -- every last one of them. Look at their websites, go to hear them speak at their next appearance. Ask around and see what others say and think.

And that's just the beginning of what you can do. Once you find your candidate, you should volunteer for their campaign. Make phone calls. Knock doors. Hand out literature. Yes, it's scary, but you want to have a chance to vote for somebody this year, instead of against everybody else, right? Remember, I heard your complaints.

And here and online at the Erie Reader we'll do our best to help you out. In the coming days, we'll be writing about the various races important to Erie, helping you to get to know the candidates and what they stand for.