Being a sports fan means being able to root like hell for a team, and paint everything in deliciously simple black-and-white, us-versus-them narratives. It?s fun to pull for teams because it?s simple. Our team is good. Their team is not. We tend to turn a blind eye toward things that complicate our fandom.

by Jay Stevens
View ProfileFacebookTwitterGoogle+RSS Feed
May 16, 2012 at 9:11 AM 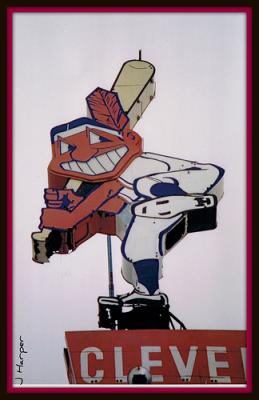 It's time to get rid of Chief Wahoo. You know who I'm talking about: the red-faced, grinning racist caricature the major league baseball team, the Cleveland Indians, use as a mascot.

Scratch that. It's beyond time.

Last week, Cleveland's alt-weekly, the Cleveland Scene, recounted the history of the club's nickname and mascot. Turns out, you know that story about how the nickname and mascot honors Louis Francis Sockalexis, the Cleveland Nap and first Native American to play professional baseball? It's a load of crap. He was a part-time player, and ragged constantly with racist epithets by the crowd. No one knows for sure how the Indians got their name in 1915 -- some suggest it was to imitate the Boston Braves, who just had a good year -- but it's pretty clear it wasn't to honor a part-time player nobody liked whose most famous exploit was jumping from a second-story whorehouse window.

I don't mean to call everybody who owns an Indians cap a racist. Being a sports fan means being able to root like hell for a team, and paint everything in deliciously simple black-and-white, us-versus-them narratives. It's fun to pull for teams because it's simple. Our team is good. Their team is not. We tend to turn a blind eye toward things that complicate our fandom. My logo is racist? You're overly sensitive! You're being too politically correct! Shut up and sit down, you're blocking the game!

I should know. I'm a Boston Red Sox fan. For years, the Red Sox were one of the most racist organizations in sports, the last team in baseball to integrate, reluctantly signing Pumpsie Green in 1959, more than a dozen years after Jackie Robinson broke the color barrier. Makes you think all that talk about the "curse of the Bambino" being responsible for that team's 80-year World Series drought is a bit of a stretch: I think maybe it has to do more with the fact the Red Sox turned down a chance to sign Willie Mays to play alongside Ted Williams.

The Cleveland Scene suggests Chief Wahoo is the reason not only the Indians suck, but all sports teams in Cleveland do. "Here on the banks of the Cuyahoga (Iroquois translation: 'Crooked River'), in the state of Ohio ('It is beautiful'), perched on what was sacred ground to Native Americans for thousands of years," wrote Peter Pottakos, "the populace clings to the only sports logo in the Western world that caricaturizes an entire race of people, even amid cries that it dehumanizes them and trivializes their plight."

Maybe. Or maybe the Indians suck because the existence of the logo suggests its owner, Larry Dolan, is hopelessly stuck in another era, one where it's okay to have a racist logo. After all, isn't it bad marketing sense to be insensible to modern-day mores?

"The only reason Chief Wahoo is around is because Native Americans don't have a strong enough voice in this country to put a stop to it," wrote sportswriter and lifelong Indians fan, Joe Posnanski, in a 2007 piece. "When Native Americans protested at the 1997 World Series, they were mostly laughed at. Three were arrested. Is this really the kind of country we want to be? And for what? To stand up for our inherent rights to enjoy a racist sports logo?"

Posnanksi suggests the Indians scrap the logo, and the name. Return to calling themselves the "Cleveland Spiders." You know, the name the team used in the 1890s. It's a no-brainer, really. Just imagine the logo possibilities, the marketing! But Cleveland -- and the rest of us -- likely will have to wait. For now, we're stuck with Chief Wahoo.