The numbers don't lie, and they don't look good for Gov. Corbett, either. 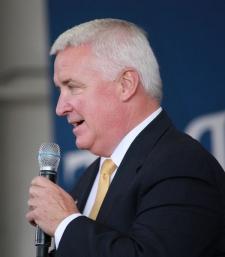 In January, Public Policy Polling (PPP) found that 38 percent of Pennsylvanians approved of his job performance. A whopping 52 percent disapproved. The rest were undecided.

And while the January poll showed him leading every match-up against potential Democratic contenders, he never exceeded 42 percent against any of them – including Democrats like Rob McCord or John Hanger, who topped 70 percent in "not sure" in the favorability poll.

The March PPP numbers were worse. In the later poll, only 33 percent approved of the governor's work, and 58 percent disapproved. And in this poll, he peaks at 34 percent in one-on-one matchups against Democrats, and loses all of them – including the match-ups against largely unknown candidates.

A recent Quinnipiac poll is better for Corbett, but not by much: only 35 percent of Pennsylvania voters thought that he deserved to be reelected..

But...what does this mean?

For starters, it looks like Pennsylvanians would rather vote for some candidate pulled off the street than for Gov. Corbett.

But then it's a long way off until Pennsylvania's gubernatorial election in November 2014. That gives Gov. Corbett time to salvage his reputation and woo voters. Numbers this far out from the election rarely match the numbers on Election Day, especially before months of campaigning.

On the other hand, these are really troubling numbers for Corbett. It is difficult to recover from disapproval numbers above 50 percent. That means he has to win over voters who actively dislike the work he's done in order to win re-election. It's possible, but might mean a major policy change in Harrisburg.

The best-known name in the possible Democratic field is Joe Sestak, who's famous for losing to Pat Toomey in the 2010 Senate race.

Not only do Democrats need to earn name recognition in order to win, they likely have to endure a lengthy, bitter, and expensive primary to earn the right to challenge the sitting governor.

It's a long way to November 2014, and there are innumerable hurdles for the Democrats to cross to unseat Corbett. But the biggest weapon the Democrats have in the race may be Corbett himself. Relentlessly ideological, Corbett has trashed the public school system, rigged the tax and regulatory system to favor big business, and engaged in privatization schemes by trying to sell off the state lottery – all done with the flair of a school-yard bully.

He's his own worst enemy, but doesn't seem to care.