Controversy abounds as the debate over gun control rages; Jay Stevens brings his unique viewpoint to the conversation. 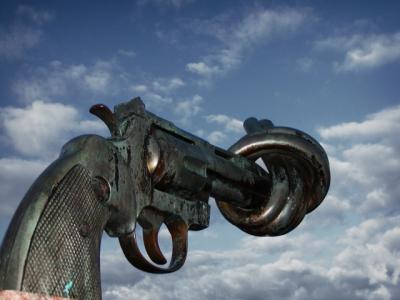 What are we to make of the recent gun control debate? I mean, really. I have no idea.

Like you and everyone else, I was horrified by the Sandy Hook Elementary shooting. I have kids in school. But – and let's be honest here – it's not likely a crazed gunman is going to shoot down my kids in their classroom. It's just not likely. What's more likely, far, far more likely, is that some thoughtless commuter is going to run them over in the crosswalk on their way to school. After all, once or twice a week a thoughtless commuter nearly does run them down at the crosswalk on their way to school.

But gun violence is common. Tens of thousands die each year in gun-related incidents, whether through suicide, murder, or accident. And more than 1,200 died by guns since the Sandy Hook shooting. This is a problem. And preventable.

The proposals for gun reform the Obama administration put forth – more stringent background checks, banning of certain kinds of guns, ammunition, and magazines – wouldn't have stopped Adam Lanza from killing 20 first graders this past December. The arms belonged to his mother, who he also killed. She would have likely passed any background check.

But the proposals are common-sense. Right now, a background check is required for purchasers at a gun store, but not for private purchases. That's a huge loophole. President Barack Obama's proposal would shut that loophole, and ban assault rifles and armor-piercing bullets. These are major reforms, and won't limit Americans' ability to buy guns for hunting or self-defense.

See, I lived in Montana for nearly 15 years – gun country if there ever was. I recognize guns' utility, especially for hunting. A gun to a Westerner – and many in Western Pennsylvania – is a symbol of self-sufficiency. And I get using guns for self-defense. In certain neighborhoods, I could see owning a shotgun as a last resort against a home intruder.

But then there's people like Montana writer Walter Kirn, who, in an essay for The New Republic, wrote that the divide between those that own guns and those that don't is "like the gulf between those who've had sex and those who haven't." He talked about the time he faced down a drunk with a gun, "watched his flushed face drain pale," and how he "vanished around the bar's corner, a full retreat that left me presiding over a total victory."

"In an armed showdown," wrote Kirn, "statistics tend to lose. In those who've learned to imagine assailants everywhere and may even have faced a real assailant, guns encourage a sense of personal exceptionalism."

For many like Kirn – too many – guns give a feeling of power. It's the power over a situation that's out of control. Maybe it's a drunk outside a bar, but maybe it's your girlfriend sleeping around, or your boss being a jerk. With a gun, you know you could end it. You have power over life. You probably won't use it, but sure feels good to have that power, doesn't it?

And Kirn supports the assault weapon ban. Can you imagine the addled fantasies of the gun-hoarding militia members who froth at the mouth about black helicopters, and those that imagined that the Sandy Hook shooting was a hoax constructed by the government to get public opinion behind gun control? These are the very people who should never be let near a gun.

The Second Amendment – maybe you haven't actually read it – says "a well regulated Militia, being necessary to the security of a free State, the right of the people to keep and bear Arms, shall not be infringed." "For more than a hundred years," wrote The New Yorker's Jeffrey Toobin, "the amendment conferred on state militias a right to bear arms – but did not give individuals a right to own or carry a weapon." That doesn't matter now: in DC vs. Heller, the Supreme Court four years ago conferred that right to bear arms on individuals, regardless of the origin of the amendment or the history of its interpretation.

The proposals being bandied around won't cure gun violence. Maybe the only thing that will is a complete and comprehensive ban. But that can't happen, and maybe it shouldn't. But is that a reason not to support minor reforms, if they save lives, some lives, a few lives? Maybe even the lives of a first-grade class somewhere?