According to Jay Stevens, Mad Max: Fury Road does have a kick-ass lead, but it's still a long way from treating its female characters as, well, people.

by Jay Stevens
View ProfileFacebookTwitterGoogle+RSS Feed
June 24, 2015 at 4:15 AM 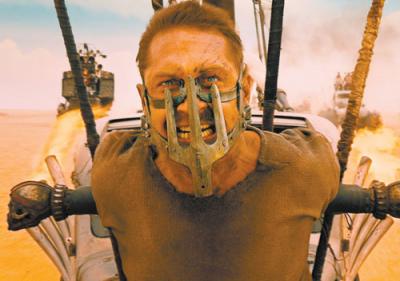 So I saw Mad Max: Fury Road. And my reaction was: what was all the fuss about?

No, it's not that I wasn't impressed by the movie. It was good. Raw and weird like its 1981 Mel Gibson predecessor, The Road Warrior. And relentless. Which makes sense, given George Miller wrote and directed the entire suite of Mad Max movies – although the less said about Beyond Thunderdome, the better.

And can I stray off topic for a moment? George Miller, creator and director of those raw, low-budget, bleak, post-apocalyptic, desert car-chase classics also co-wrote the screenplay for the kiddie pig flick, Babe, and produced and directed Babe: Pig in the City, and the Happy Feet animated penguin movies. I mean, talk about a varied body of work...

The film has all the hallmarks of the Mad Max films.

Odd characters: A dwarf with a chest scar. A pack leader with a metal nose and nipple clamps dangling through holes cut out of a three-piece suit. Obese women hooked up to breast pumps. An army of car-worshiping "war boys" who spray silver paint on their mouths just before hurling themselves to their deaths – the paint making their faces look like the chrome grill of a car.

Odd vehicles: A modified Cadillac Deville sitting on elevated wheels. A "truck" – or "war rig" in the film – that's pieced together from Czech Tatra and a Chevy Fleetmaster. And, of course, the "Doof Wagon," the "sonic carmageddon," according to the Warner Brothers studio, the mobile rock 'n' roll platform with wall of speakers and a mad musician strung at the end of bungee cords and banging out heavy-metal riffs on a double-necked, flame-spurting guitar.

So what was the fuss, exactly?

For one, Tom Hardy's Mad Max had fewer lines than his co-star, Charlize Theron, who played the one-armed Furiosa – post-apocalyptic tribal leader Immorten Joe's top warrior chief, who stole her leader's five wives to bring them to "the green place" of her childhood.

For another, Theron's Furiosa drove the truck more than Max. And she was a better shot.

Big deal, right? Not to some "men's activists." According to one – blogger Aaron Clarey – Fury Road is a "feminist piece of propaganda posing as a guy flick." Clarey was concerned that American men would be "tricked" into seeing the film "by explosions, fire tornadoes, and desert raiders," while being forced to watch Furiosa bark orders to Mad Max. "Nobody barks orders to Mad Max," wrote Clarey.

The danger? That feminists will pass on their "trope" that "women are equal to men in all things, including physique, strength, and logic."

At first glance, the men's rights movement looks like a joke. Essentially, its proponents argue that men are the true victims of discrimination in society. Ignored in custody suits, prejudiced against in domestic violence disputes, and shortchanged by government social programs, men are the true victims in the contemporary world, not women. It's a movement that thrives in online discussion groups, like the r/MensRights sub-Reddit, where you'll find comments like, "He must have raped her because everybody knows women can't lie." Or, "I often say about feminism, 'Say hello to the new boss, just as sexist as the old boss.'" Or "Every man in the west is one false accusation or encounter away from becoming an MRA [men's rights activist]."

But the movement isn't so funny when you consider it heavily influenced mass murderer, Elliot Rodger, who killed six in Southern California ostensibly to punish women for constantly rejecting him in favor of "obnoxious men." Or that some of its advocates have called Montreal mass murderer Marc Lepine a "victim of feminism" – the man who separated women students in an engineering class at gunpoint, telling them before he shot them, "You're women, you're going to be engineers, you're a bunch of feminists. I hate feminists." Or that Lepine was evoked in a bomb threat at the University of Utah in retribution for inviting video-game critic and feminist Anita Sarkeesian to speak. Sarkeesian is at the heart of the so-called "Gamergate" controversy, where she and several other women game critics and developers were subjected to a vicious campaign of misogynistic threats.

It's a delusional movement that attracts men with deep and sometimes violent issues against women.

So, yes. Mad Max: Fury Road features a female protagonist who has more lines than Max himself, and who drives and shoots better than him, too. But is it feminist?

It does pass the "Bechdel Test." That's a kind of litmus test introduced in a comic by artist Alison Bechdel on whether a film has developed female characters. To pass the test, "a movie has to have at least two women in it who talk to each other about something besides a man."

The original Star Wars trilogy fails the Bechdel Test, as does the Lord of the Rings trilogy. Citizen Kane fails, Casablanca, Singin' in the Rain, Willie Wonka and the Chocolate Factory, One Flew Over the CooCoo's Nest, Superman, Animal House, Raging Bull, The Terminator, and 10 of 14 Pixar movies all fail the Bechdel Test.

Theron's Furiosa drove the truck more than Max. And she was a better shot.

Most notably, however, is that the character Furiosa is not sexualized. She's not a love interest. She's an action hero. Period. In fact, you could very easily replace Theron's character with a man and still keep the story and script intact. You wouldn't have to change a thing. And that's unusual, to say the least.

But is it feminist? To start with, the first shot of the escaping wives, as Eileen Jones points out, "shows them standing tall against a gorgeous sun-blasted horizon, wearing white muslin bikinis and other resort-wear, and looking exactly like supermodels posing for a Vogue shoot in the deserts of Namibia." No wonder: three of the actresses playing the five wives are supermodels. The other two are the daughter of Lenny Kravitz and the granddaughter of Elvis. Apparently, the anorexic look will still be in fashion after nuclear war. And they're escaping off to a green paradise, born of the cliché of "'primitive' women as akin to Mother Earth," and women as "vessels of seedlings, awesome in their mysterious fertility," notes Jones.

So while the movie does have a kick-ass lead, it's still a long way from treating its female characters as, well, people.

The men's rights movement can breathe easy. For now.