Ted Cruz's take on climate change and the role of mainstream media in scientific verification.

by Jay Stevens
View ProfileFacebookTwitterGoogle+RSS Feed
April 1, 2015 at 5:00 AM 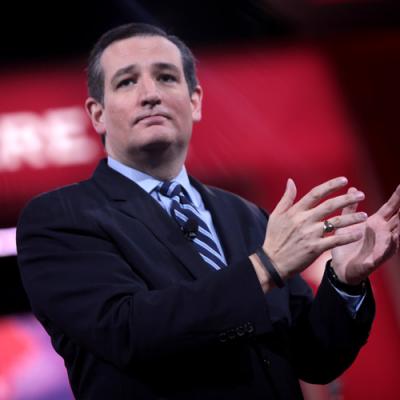 Ted Cruz says things. And many of the things he says are really, really dumb.

I get it, nobody takes Ted Cruz seriously. The Republican Senator from Texas is one of the GOP's presidential clown candidates.

You know what I'm talking about. The candidates who provide the outrageous, over-the-top quotes that make the eventual "serious" candidate look reasonable by comparison. In the last cycle, it was Minnesota House Representative Michelle Bachman saying the HPV vaccine causes "mental retardation" and Texas Governor Rick Perry saying "running for president is not an IQ test," after forgetting the names of federal agencies during a debate. And we're relieved when Jeb Bush and Hilary Clinton square up in November 2016, because – praise the Lord! – neither is Ted Cruz.

So, yes. I know I'm just falling for the crazy bait by quoting Cruz. But hear me out. This shit gets serious, I promise.

So: Ted Cruz says things. And this is what he said about climate change:

"Debates on this should follow science and should follow data. And many of the alarmists on global warming, they've got a problem 'cause the science doesn't back them up," he said. "And in particular, satellite data demonstrate for the last 17 years, there's been zero warming. None whatsoever."

On another day, Cruz likened himself to Galileo. "[G]lobal warming alarmists… don't engage in reasoned debate. What do they do? They scream, 'You're a denier.' They brand you a heretic," he said "[They're] the equivalent of the flat-Earthers. It used to be… accepted scientific wisdom the Earth is flat, and this heretic named Galileo was branded a denier."

These statements are monumentally stupid. But, here, let someone else explain:

"…Cruz selectively highlighted satellite temperature data, rather than other data (which NASA and NOAA recently used to call 2014 the hottest year on record)," wrote Chris Mooney, the Washington Post's energy and environment writer. "He also selectively focused on one year (1998), rather than examining the aggregate temperatures of many years or decades." Additionally, noted Mooney, the satellite scientist whose work Cruz cited "criticizes Cruz's approach and conclusions."

"Scientists don't scream, 'You're a denier.' They point to the scientific evidence that human activity is leading to climate warming – the evidence of which is overwhelming," wrote Philip Bump, a Washington Post columnist. "…[I]t's silly to say that 'accepted scientific wisdom' said the world was flat, because the assumption that the world was flat didn't derive from science."

Also, Galileo's revelatory and disturbing theory was not that the Earth was round, but that it revolved around the sun.

Yes, but what's notable here is the source. A mainstream newspaper stopped and analyzed the evidence behind a candidate's claim on climate change. This, folks, is new. And it seems to answer the question Jay Rosen – press critic and professor of media studies at NYU – posed to the mainstream media in a recent post on his blog, "Press Think": how are you going to handle climate change deniers in the 2016 presidential election?

Because, frankly, there are many among Republican presidential candidates.

And because denialism – or "verification in reverse," as Rosen calls it – baldly exploits the way journalism works. With verification in reverse, "you take something that's been nailed down [by evidence] and try to introduce doubt about it," wrote Rosen. Politician-deniers simply state that there is no climate change, or, like Cruz, use pseudoscience or incorrect data to deny climate change. Journalists report their statements without challenge, or at best supply a counter quote from, say, an opposing candidate or environmental activist. Claims aren't examined; instead, climate change becomes a matter of opinion.

This isn't just a random effect. It's a carefully planned strategy. Sowing doubt was a goal of a 1990s, think tank called the "Global Climate Science Communications Team," which authored a strategic plan to thwart the United States from signing on to any international climate treaties. "When [Americans are] informed that 'some scientists believe there is not enough evidence to suggest that [climate change] is a long-term change due to human behavior and activities,'" found the group, "58 percent of those surveyed said they more likely to oppose the Kyoto treaty."

Among the group's funders include Exxon Mobil, BP, and Chevron.

But climate change doesn't care if Ted Cruz – or you – believes in it. It is what it is.

And it seems the mainstream media is recognizing its lack of a verification role in climate change has hurt Americans' knowledge on the issue. Rosen cited as evidence a New York Times in-house interview with its environmental editor, Adam Bryant: "Claims that the entire field of climate science is some kind of giant hoax do not hold water," said Bryant, "and we have made a conscious decision that we are not going to take that point of view seriously."

So, how is the media going to cover climate change in the election?

If the Washington Post articles on Ted Cruz's statements are any indication, they might start aggressively examining climate change claims in the light of scientific observation and evidence.

And that would go a long way to redressing the injury that deliberately planned campaigns of distortion have done to our planet and to our communities.

And would hopefully leave climate change denialism to the clown candidates.