Street Corner Soapbox: The Senseless War in Gaza Rages On

The Israeli and Palestinian conflict continues -- and we continue to try to make sense of it all.

by Jay Stevens
View ProfileFacebookTwitterGoogle+RSS Feed
August 6, 2014 at 4:15 AM 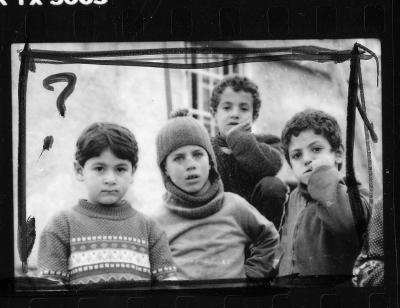 To the outside world, the Israeli-Palestinian conflict in Gaza is a dirty, senseless war marked by lies and vitriol and atrocities. Its origins, confusing. Its end, impossible. And what makes it especially frustrating for those of us here, safe and comfortable in our American beds, thousands of miles from Hamas rockets or Israeli artillery shells, is that both sides seem utterly confident that they're in the right. We don't understand why they fight, especially as a peaceful solution seems so near and so obvious, and we're puzzled by the insatiate hatred and quenchless bloodlust. We're paralyzed even as we're drawn in.

But are we so far removed from the insanity of Gaza?

And who's at fault in the conflict is similarly difficult. Is it Israel, for its harsh treatment of Palestinians? The continued occupation of Palestinian land? The restriction of travel for Palestinians? Their lack of access to water, sewage systems, and other basic utilities? The building of permanent Israeli settlements in occupied territories? Or the Palestinians, for their continued use of terrorism against Israelis? The suicide bombings, kidnappings, the riots, the rockets and mortars, the tunnels into Israel used to sneak Hamas fighters across the border? And then, after all, the occupied territories were won as the result of aggressive wars forced on Israel by its Arab neighbors in 1948, 1967, and 1973. Or maybe it's Israel's fault for expelling Palestinians from their own land after the 1948 war. But then today's Palestinians are Arab descendants of Islamic fighters that took the land from the Byzantine Empire, who inherited it from the Romans, who took it after driving away its Jewish inhabitants. Where does it stop?

And, yes, Hamas is an organization that uses terror to achieve its goal – to take all of Israel for the Palestinians. What will happen to Israeli Jews if this happens? And, yes, Benjamin Netanyahu's Likud party claims Israel's "true" border is the Jordan River – meaning that all the occupied territories belong to Israel – and support settlement as a right. Terrorism isn't limited to Israel's Arab neighbors, either: right-wing Israeli settlers resort to violence to drive Palestinians from their land, burning crops, uprooting trees, shooting at cars, firebombing, defacing mosques, assaulting Palestinian passersby, and killing many.

This conflict reflects the history and hatred. Hamas targets civilians with rocket attacks, often storing and launching them from hospitals or schools. Israel shells those positions, and hundreds of civilians die – too many of them children, some 300 since the beginning of the Israeli response. That's a result Hamas is happy to see: they've been preventing Palestinians from evacuating, and the footage and pictures of dead children help win support to their cause. Facebook is filled with feeds of dismembered Palestinian children and angry Israel supporters talking about fighting for their very existence.

Violent. Irrational. Insane. That's how it looks to us, so far away from the ancient hatreds. Idiotic. Pointless. Endless. Military response by Israel will never achieve peace. It will only create more terrorists. And Islamic terror will never bring about a peaceful Palestinian state. It will only create distrust, oppression, and more Israeli attacks. These sides almost deserve each other – or more. They've created each other, feed off each other, maybe even need each other to fuel their wars. It's a symbiotic relationship, an ecosystem of hate.

Especially when compromise is as close as it would be easy. A Palestinian state. An end to settlements. Hamas spurned in favor of more liberal organizations – like, say, Fatah. Likud abandoning its Jordan River border. Access for Palestinians to water, roads, markets.

Of course, it won't happen. Too many want more. Some Israelis are talking about reoccupying Gaza and expelling all Palestinians. Hamas gains popularity with every Israeli bomb, and too many Palestinians will fight until all of Israel is gone. Neither side trusts the other. Extremists are created by war, not diminished. With every shot fired, permanent peace becomes less likely.

And compromise looks so easy to us here. The hatred so foreign and distant. But is it?

Forget about our direct involvement – the U.S. gives aid to Israel to the tune of nearly $50 billion a year and supplies Israel with arms and munitions, which makes us allies of Israel and essentially co-participants in the conflict – and think about our own mistrust and anger and irrationality.

Like the xenophobia and racism that pens thousands of children in refugee camps on our border. It's "an invasion of our nation," said Texas Republican Steve Stockman. "We are a country, we have borders," said Ann Coulter, "and Netanyahu enforces them. Why can't we do that in America?" Protesters draped in American flags and toting assault rifles block teenage refugees fleeing from drug gangs from entering the U.S.

Like the fear that drove the U.S. invasion of Iraq. That caused Americans to collectively shrug when our government passed the Patriot Act, spied on its own people, kidnapped, and tortured in our name. Like the state governments that refuse federal funding of the expansion of Medicaid under Obamacare, leaving millions of their own citizens to dangle without healthcare for no other reason than raw spite. Like evangelical Christians who support Israel because they see a Jewish state as a prerequisite for End Times, which they want to hurry along.

We shouldn't view the Israeli-Palestinian conflict as an aberration, or someone else's problem, as a mysterious, distant war. Instead, it is a warning. That the passion and cruelty and senselessness there also lives here at home, as well.