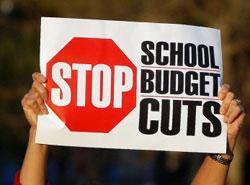 And that's exactly why Erie should join the lawsuit.

After all, it was only a few days ago that we woke up to an Erie Times-News headline that told us not only had the nation's poverty rate soared to a new 17-year high, but that Erie's poverty rate is twice the nation's. Over 30 percent of Erie's citizens now live in poverty ? under a $22,350 annual income for a family of four ? including 43 percent of our city's children.

Education, of course, is the surest antidote to poverty. Free, quality education ensures that all have the opportunity for a productive life, an ?inherent and indefeasible? right of all Pennsylvanians. At least according to the state constitution, which also mandates ?a thorough and efficient system of public education to serve the needs of the Commonwealth.?

Tell that to Gov. Corbett, who cut $26 million from the Erie school district budget. As a result, the district eliminated more than 200 teacher positions and slashed critical enrichment and after-school programs, gut-punching our schools at the very time our city can least afford it.

And where did the money go? In part, to an increase in the state Department of Corrections, ostensibly to deal with a growing prison population, which the bipartisan state Commission on Sentencing attributed to ?mandatory sentences for petty drug crimes,? according to Philly.com's Ben Waxman. Or, as ED Kain wrote in March on Forbes, ?[d]e-funding and de-prioritizing public education while ramping up the never-ending war on drugs is about the most toxic combination of policies you can scrape together.?

But that's exactly the point. The Erie County Republicans give us a hint of an agenda on a web page entitled, ?The Facts on Education Spending,? which cites stagnant test scores as a reason to dole out tax credits and vouchers for private schools, never mind that a $1,000 coupon means little against the $60,000 tuition needed to educate a child at the Erie Day School, or that the quality of education at charter schools is wildly uneven, not to mention teacher layoffs may have something to do with stagnant test scores.

Going after public schools makes sense for those that think that education is too valuable to be wasted on those that can't afford it. Like, say, Senator Pat Toomey, who praised in his book ?The Road to Prosperity? the idea of buying education like any other commodity ? ensuring that schooling, like designer dresses or luxury yachts, goes only to those that can afford it.

It's a kind of ?me first? attitude you now see everywhere, from the Pennsylvania flood victims who demand federal relief money in the same breath as decrying expenditures for parks and playgrounds, to senior Tea Party protesters who rail against taxes but demand that government ?keep its hands off Medicare.? Here in Erie, schoolchildren are its collateral damage.

When did selfishness become a virtue?