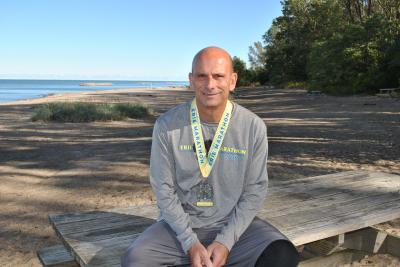 Five weeks before the 2016 Boston Marathon, Erie runner Paul Bressan suffered a stroke, losing his ability to walk independently. After rigorous physical therapy and training, Bressan was able to compete in and finish September's Erie Marathon in four hours and eight minutes.

Paul Bressan qualified to run his first Boston Marathon in 2014. He was elated. Then he was bumped.

Even though Bressan met the qualifying time, runners in his 55-59-year-old age group who ran mere seconds faster had taken all of the spots.

Only seasoned runners are familiar with Boston's bumping peril. To run Boston, one must complete a marathon during the prior year under a certain time. However, beating that time only allows the opportunity to submit for registration. It doesn't guarantee acceptance. If the race's total submissions surpass the total number of qualified athletes they'll accept, they lower age-group qualifying times, eliminating some runners in each age group.

In 2014, they lowered qualifying times by 98 seconds. Bressan was out.

But dreams die hard. Bressan kept training and qualified to run the 2016 marathon, beating the time by six minutes. Bressan was Boston bound.

Five weeks before the marathon, the 60-year-old was in peak physical condition. He completed a grueling 18-mile run and jumped on a plane, heading west for a vacation. After a few days in Sedona, Ariz., he went for a five-mile run then boarded a second plane, landing in California. There, he was tired and turned in for the night at a Venice Beach Bed and Breakfast.

At 2 a.m., he rose and went to the bathroom. He was dizzy, leaning to one side, and finally lost his balance. Bressan thought he had vertigo and crawled on hands and knees back to bed. The next day he could barely lift his head off the pillow. After briefly attempting to get up, he went back to bed. The next morning, his girlfriend and her daughter carried him to the car and took him to the hospital.

"I thought they'd give me something for vertigo and send me home," he said.

Instead, they gave him the bad news: he'd suffered a stroke.

"My stroke was in the bilateral cerebellar territory. It is referred to as an ischemic cerebral infarction."

Bressan had none of the lifestyle risk factors which include being overweight, physical inactivity, heavy/binge drinking, illicit-drug use, smoking, diabetes, high blood pressure, sleep apnea, or high cholesterol. But there he was lying in a UCLA Santa Monica hospital — a stroke victim.

Bressan had both physical and mental impairments. He spent four days at that California hospital, unable to walk on his own. He used a walker and was forced to learn to walk all over again. His physical therapy included balance exercises, weights, and circuit training for strength. Occupational therapy included reading and cognitive exercises to boost mental acumen.

He flew home to Erie and continued therapy, spending only a few days at a rehabilitation facility. Because of his physical fitness and mental drive, he quickly graduated to outpatient status.

After three demanding months in which he often walked three-fourths of a mile to his rehab facility, he was permitted to drive and began reassembling his life — which included running.

The Inspiration to Recovery

Bressan credits his recovery to family, friends, and staying busy. "I spent the summer working in my front yard, finishing my therapy," he said. "I began running one or two miles."

Despite continued weakness on one side, Bressan was able to increase his running. "My running buddies supported me, inspired me," he said, then quipped, "They kept me from veering into the bay."

By July, Bressan was doing so well he completed Erie's Half Marathon, finishing in an impressive one hour and 54 minutes.

Bressan looks at life differently now. He listens to his body. He's cautious. Physically, he has lost some stamina, so running the Boston Marathon, which once seemed so important, is way down on the bucket list now, below much more important life goals.

Looking back, as a stroke victim with no risk factors, he reevaluates four sides of his life at the time of his stroke. He said he was "spiritually in a good place, grateful and giving; financially headed in the right direction; physically in excellent condition, and; emotionally sound with great friends and family."

The one factor he questions is the high level of stress he endured from employment. But he owns up to it. "That was on me," he said. "I chose those circumstances."

Now he refuses to put himself in high-stress situations he can avoid. He evaluates life events and consciously makes choices based on his overall well-being. He advises others to do the same no matter where they are in life.

This year, Bressan listened to his body. He was ready. He trained, ran, and finished the September Erie Marathon. Friends and family shed a tear or two as they watched him cross the finish line, but not Paul. He was just glad to check that box off on his bucket list.

Still, a bit of the old Paul surfaces. He says his time wasn't great. We beg to differ. Post-stroke, 62 years old, four hours and eight minutes?

Cyndie Zahner is the author of the books The Suicide Gene, Dream Wide Awake, and its prequel, Project Dream. She can be found online at cyndiezahner.com and at cyndie.zahner@yahoo.com

Face – Is the face drooping? Ask person to smile. Is the smile lopsided/uneven?

Arms – Is an arm weak/numb? Ask person to raise both. Does either drift downward?

Speech – Is speech slurred? Ask person to repeat a simple sentence. Are they able? Hard to understand?

Other symptoms may include a sudden severe headache; sudden numbness/weakness, especially on one side of the body; sudden confusion/understanding/speaking; trouble walking, dizziness, loss of balance/coordination.

Never ignore symptoms. Marathoner Paul Bressan's symptoms included exhaustion, weakness, loss of coordination, and confusion. Tests determined his stroke "may have been caused by" a Patent Foramen Ovale (PFO), which he has since had surgery to correct. A PFO is a hole in the heart that did not close after birth. Approximately 25 percent of the normal population have PFOs, but most never know they have it.

Time is of the essence. Had Bressan gone to the hospital immediately upon showing symptoms, doctors could have given a firmer diagnosis. Time is critical in both diagnosing and treating stroke victims.

Strokes can hit the young, healthy, or seasoned athlete. If you have symptoms, call 911.