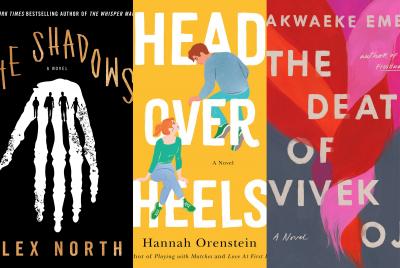 The Shadows by Alex North

What it's about: In a desolate English town, Charlie Crabtree committed a murder so horrendous that it continues to live on in infamy in the dark corners of the Internet, with copycat killers cropping up every few years. Now, 25 years later, Paul Adams — a friend of both Charlie and his victim — has returned home after his ailing mother's health takes a turn. Before long, strange things begin happening to Paul, bringing past memories with them. The most unsettling memory of all, though, is that after the murder, Charlie Crabtree disappeared — and was never found.

Why you'll love it: North writes with such intensity and passion that it is difficult not to be immediately pulled in, drawn to the characters' struggle with such a horrific murder and the circumstances leading up to it. Each chapter pulls you further into the tangled web of Paul's life, both now and 25 years ago, and the jumps between the past and present are seamlessly blended to keep you on track but hooked nonetheless. With multiple twists and jaw-dropping moments, The Shadows is sure to keep you on edge until the very last page.

Head Over Heels by Hannah Orenstein

What it's about: Avery Abrams is a gymnast whose luck seems to have run out. After a terrible performance, Avery's dreams of joining the Olympic team are crushed, she and her football star boyfriend break up, and her best friend and teammate, Jasmine, becomes an Olympic champion, marrying their emotionally abusive coach. Returning to her hometown, Avery begins working alongside new coach Ryan to train a young gymnast with promise. Sparks start to fly, but when a scandal hits the gymnastics world, it has devastating effects on Avery and her old friend Jasmine.

Why you'll love it: Orenstein's characters jump off the page and come to life, giving this story an edge compared to typical romance genre novels. Shining a light on the pressures of elite competitions, the story focuses not only on Avery's love life, but also on her other relationships, both professional and personal. Orenstein does well in balancing heavy topics with lighter tones, creating a summer read that you won't want to put down.

The Death of Vivek Oji by Akwaeke Emezi

What it's about: When a Nigerian mother finds her son's body wrapped in fabric on her doorstep, the struggle to understand ensues. Growing up, Vivek Oji suffered blackouts with disconnection between both himself and his surroundings, with an understanding but overprotective mother and distant father raising him. As he becomes an adult, he forms friendships that bring him comfort, his closest being with his cousin Osita. As their bond grows stronger, Osita tries to better understand Vivek's intensifying crisis that ends in an unanticipated act of violence.

Why you'll love it: Emezi's writing captivates from the beginning, with characters that are unforgettable and a vivid storyline that will leave readers wanting more. The novel focuses on much more than Vivek's death, drawing into the story both his life and the people that surround him. With an excellent balance between first-person and third-person narratives and the ability to build tension through subtle foreshadowing, Emezi creates a compelling and gorgeous novel that all should read.