Super Mania!: 'Shazam!' is a Burst of Fun and Adventure 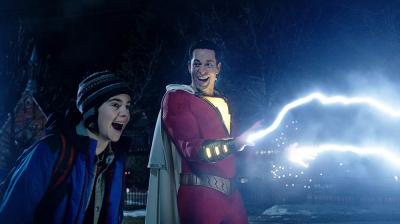 I have a particular philosophy with film titles. It is my belief that whenever a movie's title ends with an exclamation point, I am certain that the movie is going to be a fun ride from beginning to end. I am happy to report that the newest DC superhero film, Shazam! carries on that tradition by being an absolute blast! In fact, the film has so much fun with its ridiculous premise, that it reminds us why this subgenre has had such a mass generational appeal in the first place.

This is the story of young Billy Batson (Asher Angel), an orphan teenager adjusting to his new foster family. While Billy deals with problems that many young people find themselves faced with, he suddenly gets whisked away to a fantastical realm where he is told that he has been chosen to carry on the legacy of ancient wizards called forth by a magic word. As Billy indulges in his newfound superpowers, he soon realizes that an evil force is after both him and his family.

The film has a ton of fun playing up the tropes of superhero films while also being a pretty exciting superhero film in its own right. That is where the appeal of Shazam! comes from; giving us a magical world and a villainous threat (played by a sinister Mark Strong) that is believable and menacing while still holding onto that sense of fun and adventure on which superhero films have always relied. In this age when superhero films are split between grim seriousness (mostly DC) and smirking irony (generally Marvel) Shazam! rides the perfect line between action and comedy. — Forest Taylor

"The Bums Lost": 'The Beach Bum' is Nonsense Presented as Genius