Systematic Racism in the United States

A look at the ways in which systematic racism opperates in the United States and the implications it has on the grand jury decision not to indict officer Darren Wilson. 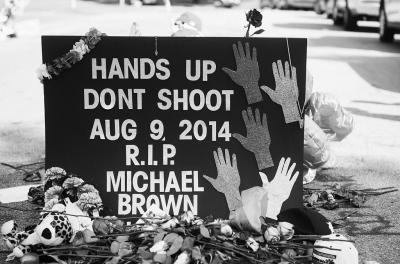 "No young man should ever die. This is the loss of a life and it's a tragic loss, regardless of the circumstances," said prosecuting attorney Bob McCulloch after announcing the grand jury decision not to indict Officer Darren Wilson, the police officer from Ferguson, Missouri who fatally shot Michael Brown – an unarmed, 18 year old, African American – on August 9.  "But it's opened old wounds," he continued, "and it's given us an opportunity now to address those wounds, as opposed to in the past where they just fade away."

His closing statement sounded optimistic, suggesting the possibility of change and encouraging those who disagree with the grand jury decision to stand their ground and stand up for what they believe in by engaging in protests and demonstrations. "For how many years have we been talking about the issues that lead to instances like this, and yet after a period of time, it just sort of fades away," he reiterated.

He's right. The issue he speaks of is one that has plagued our country since its founding. It's one that has been brought to the attention of mainstream America in numerous instances along with countless legislative attempts to eradicate it, and the false notion and widespread belief that those attempts were successful. It's an issue exclusive to the United States of America. An issue disguised in unrealistic media portrayals and age old ideologies that we cling on to desperately, afraid of defying the things that we feel we have earned and the things we have been brought up to believe.

McCulloch is right in his acknowledgement of the reopening of "old wounds" and of the persisting discussion that has gone on of "issues that lead to instances like this." But he is also a hypocrite and a coward. A hypocrite for speaking so optimistically and encouraging citizens to take advantage of the opportunity without naming the issue specifically, and a coward for not taking the matter into his own hands and leaving it up to the grand jury instead. There is a name for this "issue" – it's called racism.

But to focus only on the individuals involved in this particular case – McCulloch, Wilson, Brown – diverts attention away from the underlying problems which perpetuate racism. In the United States, racism is manifested through social systems. The actions of individuals perpetuate racism through their passive participation in these systems.

A common analogy can be exemplified in the board game, Monopoly. Notice next time you are playing Monopoly – or any game for that matter, whether it be cards or video games – that once one player begins to gain an upper hand, their behaviors and mannerisms begin to change. A sense of entitlement emerges. Because of a person's achievement in the game, they start to attribute this success to their individual skill, making them less attuned to all other circumstances which have contributed to their position of privilege. A study of economic inequality conducted at UC Berkley confirms this.

The social systems which we live under in our everyday lives are basically enormous board games, and depending on our inherited starting point in the game (our privilege, or lack thereof), our behaviors will be different.

So let's take a look at the way in which institutionalized racism operates systematically here in the United States. In the 1980s, after Reagan was elected, the infamous War on Drugs was declared in which budgets for federal law enforcement agencies skyrocketed. Between 1981 and 1991, DEA anti-drug spending grew from $86 million to $1.026 billion. Meanwhile, drastic budget cuts of the National Institute of Drug Abuse and the Department of Education were issued. Since 1980, there has been an increase of 1,100 percent in the number of people in prison – from 41,100 to approximately half a million. 80 percent of those related to drug charges in the 1990s were for marijuana possession – a drug scientifically proven to be less harmful than alcohol or tobacco.

Accompanied by the use of highly racialized terms like "welfare queen" and television commercials depicting blacks as rotten, perverted criminals, a color blind stigma was created by politicians which infiltrated the American subconscious. Colorblind in the fact that it was racist, but lacking in the use of explicitly racist language so as to be generally viewed as socially acceptable. A survey published in the Journal of Alcohol and Drug Education in 1995 asked volunteers to close their eyes and envision a drug user. Ninety-five percent of respondents said they pictured the drug user as African American.

The resulting tragedy was that a disproportionate number of African Americans have been locked up for "crimes," which are more likely to be committed by whites – a system comparable of that to the Jim Crow laws that preceded the Reconstruction period. According to a Human Rights Watch report in 2000, African Americans make up between 80 and 90 percent of all drug offenders sent to prison. Another study published by the National Institute of Drug Abuse the same year concluded that nearly identical percentages of white and black teenagers use marijuana, while white students are seven times more likely to use cocaine or heroin.

The issue of racism as it is relevant today isn't a matter of whether Darrin Wilson's intentions where explicitly racist, or whether Michael Brown had stolen something from a convenient store. The issue is the system – a system which has been historically shaped by the legacies of slavery and the Jim Crow laws to favor white people over blacks by systematically placing them in different social categories. Darren Wilson and Michael Brown are both players in a rigged game. But this isn't a game with paper money or thimbles; it's real life, with real consequences.

As the nation erupts in protests, it is important that those who wish to make change happen understand what it takes to do so. Indicting one man and focusing on the individuals in one particular case alone will not alter the culture of prejudice and militarization which has perpetuated racism long past the Civil Rights Movement. The task of dismantling the broader systems at play is certainly a daunting one, and there is no single solution to doing so. But a movement is brewing here in the United States, and people are making their voices heard. So long as the task at hand is understood by those who wish to take a stand, it may be possible to address these wounds in a way that will not just fade away.

For more information about institutional racism, read The New Jim Crow: Mass Incarceration in the Age of Colorblindness by Michelle Alexander.

Will Taylor can be contacted at wTaylor@ErieReader.com