Take a Chance on HEISENBERG 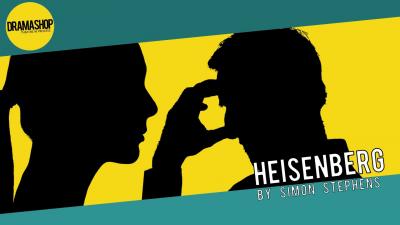 Any romantic encounter where one party does not discover the other by swiping right seems to have a hint of the mysterious and the serendipitous. And so the two main characters of HEISENBERG come together, not through Tinder, but through literal impact with one another. Curious as to how and why the duo enter each other's lives? Then come to the Simon Stephens play at Erie's Dramashop starting on Friday, November 3 and running Friday and Saturday evenings through November 18.

Also having penned the Tony-award winning epistle The Curious Incident of the Dog in the Night, Stephens presented HEISENBERG, a two-person play originally performed Off-Broadway. The plot is simple but extremely compelling. Set in a busy London train station, Georgie — played at Dramashop by Jessica Annunziata — notices Alex (Shawn Clerkin) and kisses him, randomly, on the neck. The play then tracks what happens next, and the adventure upon which the duo embark.

Dramashop artistic director Zach Flock says that Stephens, a "powerful contemporary author," has created a play that is "really intriguing [and] well-written. It will captivate audiences." The theater made a bold decision to put on such an intimate play, which was performed on Broadway to a 200-seat audience, positioned onstage and close to actors Mary-Louise Parker and Denis Arndt. "Few theatres in town can get away with doing a two-person show, because the conventional wisdom in community theatre is the larger the cast, the bigger the audience," Flock added. Not so, in the case of Dramashop nor the play itself.

So go ahead, immerse yourself in the story of Georgie and Alex this November and see how an accidental encounter can play out...with no swiping at all in sight. — Miriam Lamey