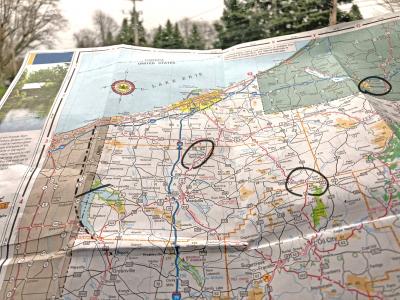 After the unprecedented summer of 2020, many are looking towards this summer with a little more optimism. The pandemic is not over and masking, social distancing, and caution will still be the norm, but as the vaccination becomes more widely available, it is likely that we will begin the transition back to something that feels a bit more like the Before Times. If getting outside of your bubble is a possibility this summer, consider some daycations that you might otherwise overlook, which will serve both as a reminder of the richness of our area while also keeping money local, helping the regional economy.

A Day at the Museums - Jamestown and Salamanca, N.Y.

Less than an hour's drive from Erie is the Rust Belt city of Jamestown, N.Y. This well-known hometown of Lucille Ball and former "Furniture Capital of the World" also became the home of the National Comedy Center in 2018 and was named among TIME Magazine's World's Greatest Places in 2019. With over 50 exhibits and an unprecedented archive collection, it is a comedy lover's paradise. Have you ever wanted to see Jerry Seinfeld's puffy shirt? Here's your chance. Bonus: It also includes dual admission into the Lucy-Desi Museum.

Hop back on the road and venture towards Salamanca where you can visit the Seneca-Iroquois National Museum, home of the mesmerizing and essential Onöhsagwë:de' Cultural Center, which also opened to the public in 2018. The center is "dedicated to the honorable presentation of the prehistory, history, and contemporary culture of the Iroquois, with special emphasis on the Seneca" and is an absolute must-visit. Exhibits include Iroquois tattooing, Seneca medicine, and the construction of the Kinzua Dam that resulted in the tragic displacement of hundreds of Seneca.

You won't have to travel far to find something to eat from there. Check out Salamanca's Rock'n Taco or the beloved local staple, the Plaza Restaurant — or take a detour in Lakewood on the way home for a bite and six-pack-to-go at Southern Tier Brewery.

If you didn't grow up in Crawford County, it is likely that you only know of Venango for golf and beer, but the tiny creekside borough of less than 300 is a tight-knit community whose residents are fiercely loyal to their small town.

Step foot in the Venango General Store, housed in a recently renovated 19th-century building on five acres along the banks of French Creek, and it feels a bit like walking back in time as you order one of the finest breakfasts in Northwestern Pennsylvania. Stop in their shop for locally-made goods and before you leave, plan a day to come back in the evening for one of their many summer outdoor events – featuring some of the best live music around – and an impressive home-style dinner menu (which also includes plenty of vegetarian, vegan, and gluten-free options). If you're able, bring some nonperishables to donate to their community food pantry.

Afterward, you will likely want to walk off that breakfast, so strap on your hiking boots and make your way into neighboring Cambridge Springs where there are two easy trails worth exploring: the 3.6 mile Trolley Line Trail along an old rail line path (beginning on Swamp Road) and the 1.5 mile Muddy Creek Holly Trail in the Erie National Wildlife Refuge.

If swinging golf clubs brings you joy, the Riverside Golf Course is under new local ownership with a new fleet of golf carts, and once you've worked up an appetite again, drop by the renovated restaurant on the premises. It's been rebranded as The Rambler, inspired by one of the monikers of the King of the Hoboes himself, Leon Ray Livingston, who published many of his books from Cambridge Springs. If golf isn't your thing, take a walk around the downtown district and visit Earth, Wind, and Wire Studio and Rock Shop for some locally-made art. Walk across the street to explore three floors of consignments at Walker's Buttons & Bows and then snag some grub at longtime Spa staples like the Found Lounge, Bambino's Hometown Pizzeria, or the legendary Hole in One Hoagies. Be sure to pick up some Finney's Chocolates too.

From there, take a joy ride out into the countryside on Route 408 towards famed abolitionist John Brown's Tannery on John Brown Road. There's not much left besides the remnants of his tannery, a small cemetery where his first wife and child are buried, and a historical marker, but he spent a formative decade of his life there as a young father. If nothing else, it'll make for some great selfies. Then, if you still have time and energy before heading home, you can travel westward 10 miles to take in the evening scenery and sights at the Woodcock Creek Lake or head east 10 miles on Route 77 to enjoy the natural beauty of Canadohta Lake.

The "Pymatuning Triangle" isn't a term people actually use, but that's how I always describe our family trips around the massive man-made lake. We always start with the famous and strange roadside attraction in Linesville: the spillway. If you've somehow never been there, it's hard to describe just how bizarrely captivating it is to watch thousands of carp and ducks and geese compete for the old white bread being tossed in the water, but clearly, it is, as it is one of Pennsylvania's most visited attractions.

Crossing the nearby scenic two-mile long causeway bridge will then take you into Andover, Ohio where there are plenty of food options. There's the hometown Andover Diner (no dinors in the Buckeye State), the Bakery on the Square to satisfy your sweet tooth, or the extremely unique Covered Bridge Pizza, which opened in 1977 inside a restored 1862 lattice truss bridge. If you decide to stay the night at one of the many nearby campgrounds, be sure to snag some meat and cheese at the family-owned Piper's Meats.

From Andover, you have options. Travel directly north for a 30-minute countryside drive and you'll arrive in Conneaut, Ohio where you can track down the numerous covered bridges or explore the many museums and parks before snagging some White Turkey Drive-In on the way home. Another option is taking the 15-minute drive southeast to explore Jamestown, Pennsylvania and picking up something from Lago Winery and Mortals Key Brewery, or crossing back over the causeway for a stop in Conneaut Lake.

My grandmother grew up in nearby Plumer, so I spent a lot of time in Titusville growing up and the historic homes, the rich history, and the natural beauty of the area have always been a source of fascination for me. If you appreciate architecture, park your car near the historic district and you can walk for miles simply admiring the stunning Victorian-era homes.

You could spend days exploring the Oil Region and its many parks and trails and surrounding towns (and, if you want to, you can book one of the 21 air-conditioned caboose rooms at the Caboose Motel for $79 per night on weekdays). The nearby Oil Creek and Titusville Railroad will also begin operating its three-hour round-trip rides and Murder Mystery Dinners again beginning in June with new seating restrictions.

From there, it's mostly figuring out what you want to spend your time doing. If you're interested in the history, you can visit the Tarbell House, where muckraker Ida Tarbell lived as a teenager, and the Drake Well Museum & Park, which interprets the early years of the American oil industry and the contributions of Edwin Drake (who is buried and has a memorial at the Woodlawn Cemetery). There is also the Pithole Visitor Center, which explores the history of the infamous oil boomtown of Pithole City.

Food options include the historic Warner's Bakery, home of the original Smiley Cookie that became the face of Eat 'n Park, Missy's Arcade Restaurant for some classic home-cooking, Orr's Brewing Company for some house-made pizzas and appetizers and brews, or you can grab some classic hot dogs, burgers, and ice cream at City Limits Ice Cream near Burgess Park.

Nearby are also Oil City, Franklin, and numerous other small towns worth exploring.