Take a Visual and Artistic Journey through "Assembled Visions"

Shining brightly in the sky of Gallery Night on Dec. 4 will be the opening of "Assembled Visions," a group show featuring four regional artists. 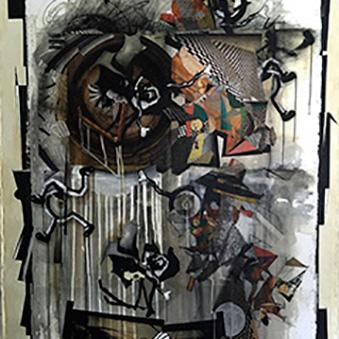 Shining brightly in the sky of Gallery Night on Dec. 4 will be the opening of "Assembled Visions," a group show featuring four regional artists. All faculty members in the Art Department of Edinboro University, Shelle Barron, Geoff Beadle, Terry McKelvey, and Fred Scruton are masters in their chosen disciplines who, together, will create a new dialogue transcending all of them. "Visions" will explore their creative processes to seek out how artists go about their work and arrive at the final piece.

Barron designs and prints her own disparate imagery and then re-constructs these fragments into new, larger, compositions where "some kind of inner truth appears." She writes in her statement for the show, "Experimentation affords me the opportunity to discover something both unknown and remembered, beyond the trappings of my overactive habits of mind."

Beadle explores the interactions of figures in illusory three-dimensional form and space, saying, "I compose these pictures with the goal of engaging the viewer in dynamic design, using the lyrical positioning of figures, shifting perspective of architectural space, and strategic arrangement of pattern, texture, color, and light." He uses multiple sources such as direct observation and photographs, but he "intentionally obscure[s] this process of compilation, attempting to create images that are seamlessly unified and convincingly real."

McKelvey says he attempts to capture the dynamic tensions or contradictions in spaces and forms in his paintings. The degree to which individual works appear realistic, expressionistic, or abstracted varies, he says, depending on his response to forms he observes and what he is trying to convey. He does, however, prefer enigmatic images which "have a greater capacity to feel compelling and universal."

Shelle Barron, Geoff Beadle, Terry McKelvey, and Fred Scruton are masters in their chosen disciplines who, together, will create a new dialogue transcending all of them.

Scruton, a photographer, embraces the "truth is stranger than fiction" tradition of street photography. His work revolves around capturing the efforts of self-taught "outsider" artists throughout the country. He sees their work as less shaped by mass media or the academic art tradition. He wants to record this outsider art because he says it is often ephemeral, saying his project is intended to "preserve the artists' transient visions, and break through the confines of one imagination."

To reveal more about their working methods, a video will accompany the exhibit wherein they describe the process of creation. Collectively, these artists have a lot to say with language — and also imagery. This promises to be a fascinating show, with works speaking to each other and creating rich and meaningful dialogues with their viewers. — Mary Birdsong