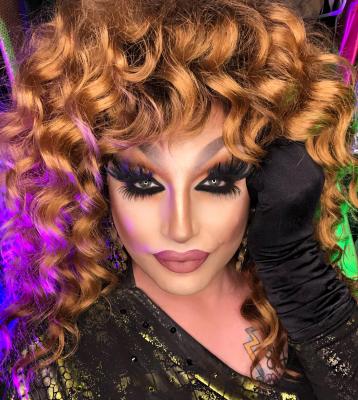 On the thirteenth installment of Tales Behind the Creative, we welcome local female impersonator/drag queen, Rebecca Mae. Mae is the reigning 2019 Miss Erie and has been busy taking over the Erie performance scene with her Drag Brunches, Dinners and Bingo events.

In Mae's early career she started off as a singer and dancer where she did five years of traveling for the producers of the shows that were conducted at Waldameer. After that, she ventured into becoming a featured singer for ten years on the Royal Caribbean cruise lines. Throughout her musical performance career, Mae had always dabbled in doing make-up as well as being heavily involved in the LGBTQ community, and with always being on the road, she started to miss her home life in Erie so she returned to pursue her career in drag.

Now being involved in the drag scene for well over three years, her career and popularity has skyrocketed. She is known for her performances around the Erie community, especially those that are put on at The Zone nightclub. She is also the creator and host of the series of Drag Brunches that were held at the Bourbon Barrel, Drag Bingoes that are held at the Erie Art Museum, and most recently her first Drag Dinner that was put on by The Andromeda Agency and held at Resolution Nightclub. These events had helped raise funds for not only her career livelihood but also to help benefit local members in the community whether that be individuals or select non-profits. Besides her own shows, she had made strides in the LGBTQ community as being the first drag queen to perform at 2019's Celebrate Erie as well as being the first drag queen that was in the Erie News Now studio for an interview regarding her Drag Dinner. Mae and her friend, Kristen Smith Ottena have recently opened up Rebecca Mae Entertainment LLC. where she will be able to book out any shows that people are interested in having her be a part of.

In terms of the COVID-19 pandemic, at first Mae's spirits deteriorated as the growth in cancellations of events she was booked for and had scheduled to host kept accumulating. As the time passed in isolation, her hopes began to rise as social media has kept her busier than ever. She has been involved in a multitude of Instagram live interviews, performances and competitions with a digital Drag Brunch that has an incredibly talented line-up in the works for April 26th. She has also been taking advantage of the amazing make-up sales as this art form is a very expensive and timely creative to be involved in.

As for advice for her friends, family and fans/followers, she speaks about the importance in staying home, washing your hands and social distancing because with the new face mask rules and regulations this makes it hard for the drag scene to succeed – as you can't lip-sync with a mask on – so health is a priority to resume these events. She also recommends finding something that makes you happy and to pursue it. This is the perfect opportunity to be inspired and dig deep into yourself to find new traits and hobbies as you may never get a chance like this again to be so invested and obtain growth in yourself. If you are feeling down in the dumps you should also seek out the company of friends and family through calling them as well as using social media to your advantage and finding an interesting show/podcast to fill the void of missing out on live performances.

So if you are bored during these times of isolation and looking to see what Rebecca Mae is doing to pass the time in a positive way during the Stay-at-Home quarantine you can find her via social media on Facebook and Instagram. You can also view his new business page on Facebook for bookings and acquiring information and tickets for future events.

Exploring the Space of 10/20 Collective