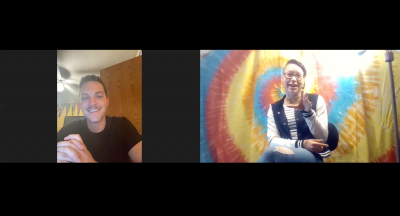 On the sixth installment of Tales Behind the Creative we welcome elementary school Spanish teacher and co-founder of Snap & Sounds, Sean McErlane. McErlane is the photographer and videographer in his company, along with his partner, Shannon Holly who conducts the DJing aspect of the business.

McErlane has been a Spanish teacher and photographer/videographer for four years now. Sean and Shannon are both teachers in the Harborcreek School District and Millcreek School District, respectively (as well as roommates) and were able to come up with the idea for their company Snaps & Sounds nine months ago after recognizing that their creative talents could be combined in order to make a successful business. Now with fairly booked schedules for weddings for 2020-2021, they hope to continue spreading their brand throughout the local community. McErlane has also recently been involved in shooting a music video for rapper CMR and a promo for a local clothing company, Kontagious.

After a recent self-quarantine, McErlane is now spending his time with his family and their two dogs making everlasting memories since this is the first time in four years that their whole family has been together under one roof. He also has been using his drone to capture photos and video for self projects, one especially of a reverse poem titled "Home," [shown in the post below] that he created in order to shine a light on the positive perspectives on the COVID-19 pandemic rather than the negatives.

Our perspective is a reflection of how we understand the world around us. Reading this poem forward is a different experience than reading it backwards. As we continue to #stayhome and practice #socialdistancing , remember the importance of your attitude and your frame of mind. No matter where you're at in the world, I challenge you to make the most of wherever you call home 🏡❣️ ⠀⠀⠀ I'd also like to extend a huge thank you to everybody who worked together to make this video possible. I wouldn't have been able to get it done without creative direction from @a_rowaily and video consultation with @hannahmarchant9 ( @hmphotovideo is her photography page, check her out! 🔌 ) ⠀⠀⠀ And of course, thank you to the friends and family who took the time to film themselves reciting my poem. You're all proof that teamwork, collaboration, and love will get us through this 👫🏽♥️ ⠀⠀⠀⠀ @daniellacarodiaz @mikorrson @hgilmore @charlesmcerlane @jwilson01 @teacherramy @mr_sakee @symone_allison @bobbecky5185 @10_btaylor @poppy ⠀⠀⠀⠀ #home #socialdistance #stayhome #covid19 #positivity #erie #reversepoetry #spokenword #videography #dronevideo #mavicpro #dji #film #eriepa #thisishome #reversepoem #pennsylvania #coronavirus #positive #mindset #perspective #socialdistance #commentary #usa #global #community

While the taboo of being around others has been a prominent thing during these times, McErlane takes these moments to sit back and take a much-needed break considering that during any other time he is quite the go-getter. He passes on advice that it is necessary to give yourself some time for you and to not feel guilty for taking a break. He also says that how you perceive things shapes how you view the world, if you're negative that's what you'll attract so the key is to stay positive during these very trying times and do what makes you happy.

McErlane's main goal as a photographer is not aimed at pleasing himself but rather to make people look their best and to tell a story through other creative visions. So if you're looking for your story to be told, you can find Sean on Instagram and Facebook as well as his company Snap & Sounds on Instagram as well.