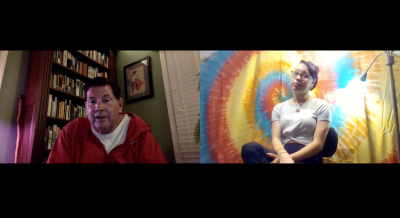 On the seventh installment of Tales Behind the Creative we welcome Professor of English Literature and Creative Writing at Edinboro University of nineteen years, Robert Hass. Hass is also a literary critic, scholar, and poet focusing on 20th-century poetry especially that of Robert Frost.

Hass knew from a very young age that he wanted to be a poet, gathering inspirations from writers like Dr. Suess and encouragement from his parents. Now in his later career, Hass has written a book on Robert Frost as well as co-editing the second volume of Frost's letters with a colleague of his from Edinboro university and two teachers from Japan. They are currently working on Volume three out of three, where each volume consists of up to 185,000 words.

Although all classes have been transferred to an online platform, Hass lucked out with the Stay-at-Home order being put in place considering he is on sabbatical for the second time in nineteen years. This welcome respite has him able to stay home and commit to writing and working on research projects. He also partakes in long nature walks with his puppy in the game lands that are adjacent to his home.

Hass speaks on this not being the first plague to set us back in our daily lives where we experience the bustle of hunkering down, shock, not addressing the problem quickly enough and most importantly lack of awareness. This type of pandemic can bring out the sheer narcissism and vulgarity of our political system where profits are ultimately placed over people's lives.

Even though there are negatives, Hass speaks of the positive in that he is delighted to see people come together in ways that were not expected, from families becoming closer and the respect that is continually given to the unsung heroes that are taking on this virus from the front lines, especially that of his sister who is herself an intensive medicine and cardiology doctor in Colorado. He passes on words of wisdom saying that we should follow the advice of the experts, pay attention to the evolving updates while staying mindful, protect yourselves and your community and to not view this time as an imprisonment but rather take the opportunity to find yourself and make something positive out of this time given to us. There is always someone who is in a worse off situation during these times so be grateful for the moments we have being "alone together."

Hass passes along a book suggestion of The Plague written by Albert Camus in 1947 in order for people to gain some insight on what is going on in the outside world while being stuck in the house. You can also read his book of poetry titled "Counting Thunder" that can be found on Amazon as well as looking up his work within the Poetry Foundation and through a Google search of his name Robert Bernard Hass.