"If you have seen any TED or TEDx talks, then you need to come and see how they come together," lead curator Jonathan D'Silva says. 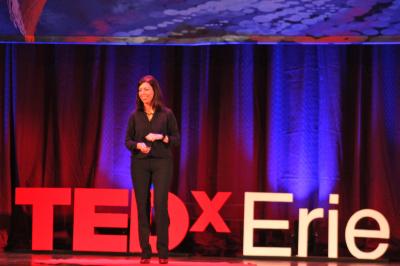 When encountering barriers, build a bridge.

That's the theme of the upcoming TEDxErie event (TED = Technology, Entertainment and Design), where several speakers will discuss how they've overcome barriers in their lives and how others can do the same.

The event kicks off at 1 p.m. and, after an intermission, lasts into the evening. TEDxErie lead curator Jonathan D'Silva says some are initially surprised by this, but he encourages everyone to attend the conference in its entirety.

"Don't attend with the idea that you are only interested in one or two speakers. Instead come with an open mind and listen to what everyone has to say," D'Silva said. "TED is based on the concept of 'Ideas Worth Sharing,' and you miss the point if you only stay for the things you might be interested in."

"Bridges Over Barriers" will feature a mix of experts and community members. Speakers include McDowell chemistry teacher Jacob Tobolewski, who will speak about "investing in one's self," and Iron Empire Clothing's RJ Messenger, who says he's "in the business of changing lives," among others.

The audience will see performances from Leeanna Golembewski, Cee Williams and Cult Classics. Dietrich Wegner, the Erie Arts and Culture Artist Commission Stage Design winner, will feature his interpretation of Bridges over Barriers.

"If you have seen any TED or TEDx talks, then you need to come and see how they come together," D'Silva said.

Tickets can be purchased online or at the door.

If unable attend the Nov. 4th event, D'Silva invites the community to check out the more informal, monthly TEDxErieSalon events, held the last Wednesday of every month — except December — typically at 6 p.m. at Calamari's Squid Row. These free programs highlight a local organization and include open discussion after guests watch a few TED talks. —Tracy Geibel