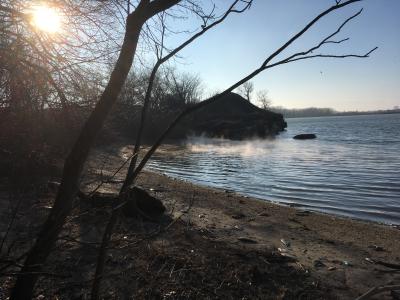 Photos by Mike Campbell
This photo, taken on the evening of March 18, shows a steamy mist rising from the surface of the water at the point where Erie Coke's NPDES-permitted discharge of cooling water enters Lake Erie at the mouth of a small stream.

In 2017, I clumsily completed the Presque Isle Partnership's final Bay Swim. It wasn't pretty — lots of gulping and doggy-paddling — but eventually, I emerged (after nearly everyone else) and rinsed the seaweed from my skin.

Most of us wouldn't. We take clean water for granted. Here on Lake Erie, we can be especially laissez-faire, even when we learn of droughts or pollution elsewhere. Surely, we'll always have clean water to drink, a clean bay for play, and clean fish to catch and grill on a summer evening.

It seems inconceivable that we could still allow our water to be compromised, after we've learned from a once un-swimmable bay and nearby burning river.

Hold Erie Coke Accountable (HECA) is working to keep us informed and empowered in securing basic rights to clean air and water for everyone in and to strengthen Erie's image as a great place for business.

At East Middle School on April 16, from 6:30 to 8 p.m., HECA is hosting a community educational event, which will explore the various environmental impacts of Erie Coke's operations. Group Against Smog and Pollution (GASP) will be on hand to present information on air pollutants, health effects, the permitting process, and ways to get involved. (See sidebar for details.)

One presenter will be biologist and Mercyhurst University professor Mike Campbell.

Their investigation initially revealed no evidence of disease-causing parasites, nor of circumstances consistent with oxygen depletion from ice cover. The dead and dying fish they were finding this winter showed numerous symptoms of , and fish collected at the site on March 19 are currently being tested by a fish pathologist with the Fish & Wildlife Service.

Their investigations in 2017 and 2018 led Mader and Campbell to "suspect that the fish were attracted to the site in winter by warm water released from Erie and that thermal shock was probably a primary cause of death." They conceded, though, that "it is possible that chemical contaminants released by Erie Coke and entering the lake through groundwater may exacerbate the situation."

Mader and Campbell emphasize that "the occurrence of groundwater pollution entering Lake Erie from Erie Coke has not been verified," so additional research is warranted. 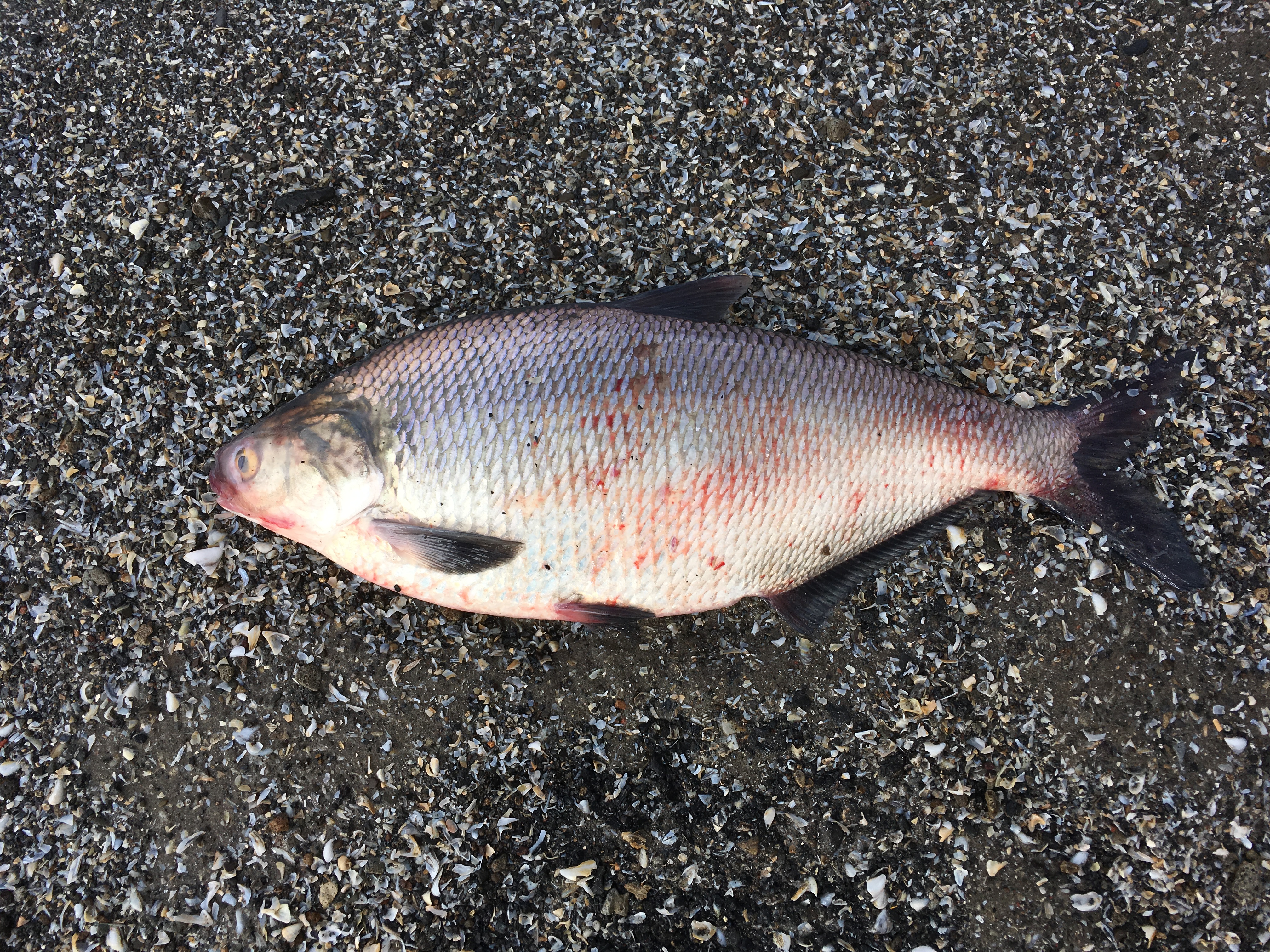 This photo, taken March 18, depicts one of several dead or dying fish that shows evidence of blood diffusing from its skin to the surface of its head and body. Several of the live fish swarming at the mouth of the stream had visible raised lesions on their skin.

Such research could provide answers that we have the right to require, just as our predecessors did in the '70s. And with funding to protect our Great Lakes back on the chopping block, it's especially critical to let our DEP know that we demand Erie Coke's compliance with regulations that protect our public health.

How You Can Help

Attend the April 16 community educational event at East Middle School from 6:30 to 8 p.m., hosted by HECA with Group Against Smog and Pollution (GASP). Learn how to get involved.

Report odors or colored plumes of smoke coming from the Erie Coke facility at the foot of East Ave. to DEP's Northwest Service Representative Kim Yeakle: (814) 332-6839 or kyeakle@pa.gov; or by calling the DEP toll-free at 1-866-255-5158; or report incidents directly to the DEP via their complaint page.

Stay tuned for more information in upcoming issues of the Reader.

"Erie has forgotten what it used to be like back in the '70s," explains Anne Helms, a graduate student in the Environmental Science and Engineering Program at Gannon University, via email.

Helms shared with me an alarming environmental study done of Presque Isle Bay by Betz Engineering in 1975 at the direction of the EPA. Its contents are beyond the scope of this article., but suffice it to say, Helms accurately characterizes the study as "a grim reminder of how bad it really was."

"At one time the Hammermill discharge was blamed for all the problems in the outer harbor," she adds. "But today, Erie Coke is the only manufacturing plant discharging warm water to that part of the lake. They're the only factory that is consistently a source of particulate matter/VOC (volatile organic compound) deposition in that area, and the only factory that has a large unlined open pit at the level of the water table that is possibly full of volatile organic compounds." Groundwater beneath Erie Coke likely makes its way to nearby streams and then Lake Erie.

In the March issue of National Geographic, Rhea Suh, president of the Natural Resources Defense Council, reminds us that the Clean Water Act of 1972 and the Safe Drinking Water Act of 1972 both passed during "a time when smog choked our cities and rivers were so contaminated, they regularly caught fire."

"Some of us now don't worry about the toxicity of the air for our children's afternoon soccer games or the flammability of the local river, primarily because our environmental protections have worked," Suh adds. "But in far too many places around the country, those basic laws are not being upheld or enforced and people are suffering the consequences."

We should know. As we covered in "Fouling Erie's Future," on Feb. 4, the DEP "issued an administrative order to Erie Coke to address ongoing violations of the Pennsylvania Air Pollution Control Act at Erie Coke's coke production facility in the City of Erie," according to the DEP website, where a copy of that order is available.

Erie Coke appealed the order on March 6, arguing that it is "vague, unreasonable, arbitrary and capricious, and constitutes an abuse of the PADEP's discretion."

I reached Rachel Filippini, executive director of GASP, by email to comment on this appeal.

"Erie Coke is acting as if they are surprised by DEP's order when, in fact, DEP met with them back in November about numerous violations," clarifies Filippini. She adds that in the order, DEP states that it sent Erie Coke a letter in November 2018 detailing the violations and requesting a plan and schedule for addressing them. In December 2018 Erie Coke provided DEP with a general outline of compliance but no schedule for implementation.

In this high-stakes time, while DEP is evaluating Erie Coke's operating permit, it's never been more important to contact our DEP; to overcome our cynicism that nothing will change — that our comments will fall on deaf ears.

"Citizens play a critical role in holding polluters accountable," says Filippini. "From reporting foul to writing letters to the editor, to testifying at public meetings — it is imperative that regulators, legislators, and the industry itself hear from those most impacted by emissions from Erie Coke."