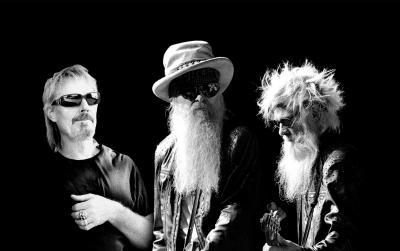 Contributed photo
With multiple platinum selling albums to their name, legendary blues rock band ZZ Top will have plenty of source material to pull from during their Warner Theatre performance on Sunday Oct 23.

ZZ Top's Raw is as close to being an accidental album as it gets.

The album, which arrived on July 22, is drawn from a session at Gruene Hall in New Braunfels, Texas in which singer/guitarist Billy Gibbons, bassist Dusty Hill and drummer Frank Beard played versions of such familiar songs as "La Grange," "Tush," "I'm Bad, I'm Nationwide," "Gimme All Your Lovin'" and "Legs" in the most live, spontaneous and basic setting possible.

The performances were filmed for use in the recent ZZ Top documentary celebrating the band's 50-year history with its classic lineup, That Little Ol' Band from Texas. When the trio unplugged and left Gruene Hall that day, they thought it was mission accomplished. The footage was shot and recorded, end of story.

"The tunes on that occasion unfolded quite in the moment," Gibbons said, recalling the session in a new email interview. "Our director, Sam (Dunn), wanted a sequence where we played in the present day as a balance to the film's historical narrative. We got in there and did what we did and later, much later, realized we had an album."

As Gibbons indicated, upon further review, the performances captured something that was worth hearing in its entirety — the unmistakable Texas blues-rock boogie of ZZ Top in its most authentic state. And the Raw album became a reality.

The album figures to take on some significance as one of the last live documents of ZZ Top with Hill, who passed away last July. A hip injury had prevented Hill from joining Gibbons and Beard for last summer's tour, and long-time guitar tech Elwood Francis had stepped in on bass. When Hill died, the band barely took time off before resuming the tour, knowing that's what Hill would have wanted.

"It was quite sudden and we remained under the assumption he'd rally, recover, and rejoin us," Gibbons said. "There was no anticipation mental or otherwise. We just had to deal with the reality of departure and the quick turnaround helped reinforce 'the show must go on' ethos. Our crew, our friends, fans, and followers have been a huge source of comfort."

Now ZZ Top, with Francis considered a long-term third member, are back on tour this summer promoting the Raw album with what promises to be a show that touches on all 50-plus years of the band's history.

"We know we'll go as far back as possible… perhaps 'Brown Sugar' or 'Just Got Back From Baby's' from the cleverly titled ZZ Top's First Album or even Willie Brown's Future Blues that predates us by 40 plus years," Gibbons said. "Of course, (we'll include) a few of the ones well-known like "La Grange" and "Legs." What's certain is the famed adage of 'something old, something borrowed and most definitely something blue' (will apply)."

ZZ Top's longevity is notable enough, but the fact that the classic lineup remained intact for 50-plus years makes ZZ Top a rare example of stability and sustained creativity and quality in what is often a volatile reality of being a rock band.

The ZZ Top story is told quite colorfully in That Little Ol' Band from Texas, during which Gibbons, Hill and Beard take viewers on a trip through ZZ Top's 50-year history. The film hits a lot of highlights, including how the trio came together, how the group got its distinctive high-powered sound, and their initial commercial breakthrough. From there, the film visits a late '70s period that included a hiatus and Beard's battle with addictions and moves onto the 1980s, when ZZ Top incorporated synthesizers and sequencers into their sound and hit a commercial grand slam with the 1983 album, Eliminator, before reaching into the present day.

ZZ Top made their first big impact with the 1973 album Tres Hombres and its single, "La Grange." Subsequent early hits like "Tush," "Tube Steak Boogie" and "Cheap Sunglasses" helped the band notch a string of five gold or platinum albums during the 1970s and early 1980s.

Then a convergence of factors — the arrival of sequencers and other recording tools, the debut of MTV (which aired the groundbreaking videos for the hit songs "Legs," "Gimme All Your Lovin'" and "Sharp Dressed Man") and some inspired songwriting — made ZZ Top mega-platinum superstars (with Gibbons and Hill debuting their newly grown outsized beards).

With Francis on board, Gibbons considers ZZ Top a band that still has plenty to say musically. He's hinted that an album of new material could happen.

"Elwood is certainly in with us for the long haul," Gibbons said. "It's still ZZ Top, not ZZ Top 2 or ZZ Top with an asterisk. The genuine article abides!"