by Liz Allen
View ProfileFacebookTwitterRSS Feed
August 15, 2018 at 9:45 AM 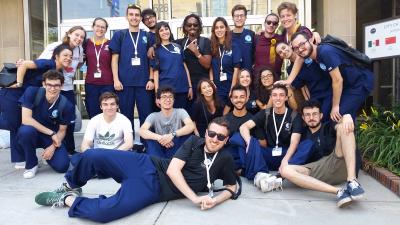 This is how a request for a key to the city unlocked some delightful insights for me about Erie.

The story begins with a boisterous group of Italian medical students cheering at an Erie SeaWolves' Buck Night, alights briefly on new bestsellers by James and Deborah Fallows and Maria Shriver, includes a taste of Dungarvan, Ireland, and winds up at the Nuova Aurora Club.

During my travels, in person and via print, I've been impressed anew with the lessons we learn when we open our hearts and our homes to people from around the globe, even when the visits are short.

At the baseball team's Buck Night on July 23, one of my usher colleagues, John Pirrello, introduced me to two 21-year-old University of Florence students, Laura and Camilla Bechini. They were attending the ninth annual Giovanni Mazzotti Anatomy Conference, held at Gannon University this summer. John explained to the young women that fans of America's pastime don't cheer nonstop and at ear-splitting volume, as soccer fans like to do, then he switched the conversation from baseball to politics.

"Liz is a bigwig official now," John boasted, as he told them that I serve on Erie City Council. "She can get you a key to the city!"

I do have a key that unlocks the door to the City Council chambers, but I had no idea how to get a key to the city, although Mayor Joe Schember later told me that he and his staff had discovered a stash of such commemorative gifts somewhere at City Hall.

Instead, the students and their advisor, Dr. Marion Olivieri, said they would be happy if I could give them a tour of City Hall.

But between their anatomy classes, my work schedule, and their plans to move on from Erie to visit Niagara Falls, Toronto New York City, we didn't have time to arrange a tour.

As an alternative, I offered to talk to the students outside of City Hall on July 25, before they headed to dinner after a long day in anatomy class and after I had ushered at a daytime doubleheader at UPMC Park.

I learned from Olivieri that the Mazzotti Anatomy Conference is one of many programs offered by Chartered Professors, a private organization that provides international educational experiences for both students and adults. Gannon hosted this year's anatomy conference, allowing students to get hands-on experience in the cadaver and gross anatomy labs at Gannon's Morosky Academic Center. In Italy, Olivieri said, medical school training is more theoretical.

Students came in two groups — the first with 53 students, the next with 62 students. They were selected in a competitive process, based on grades and English language skills, from universities in Florence, Bologna, Pisa, Modena, Ferraro, Naples Rome. Not only would they be studying in a foreign land; they would be making new friends from their home country while staying in Erie. "It was great to see other mates studying medicine from other parts of Italy," said Riccardo Grandin, 21, from Venice.

The students were housed in Gannon's Kenilworth dorm and, after spending all day doing dissections and taking tests, they had a whirlwind 12-day introduction to Erie. They visited Presque Isle for a beach concert, sang "Volare" at the Sloppy Duck, cheered for the World Cup at Calamari's, ate American-style pizza and bowled at the Nuova Aurora, among other social activities.

"Italian people sing a lot. They just have a real love of life," said Olivieri, who made sure the students had a guitar, so they could "sing in the van, sing in the house, sing in the courtyard (of the dorm)." The students even did an Abbey Road-like pose for a photo in the crosswalk connecting Gannon's campus on West Seventh Street, between Peach and Sassafras streets.

My talk outside the State Street entrance to City Hall might have seemed dull compared to their other activities, but the students, dressed in navy blue scrubs, were attentive as we gathered in front of the plaques that commemorate Erie's sister cities: Merida, Mexico; Zibo, China; Lublin, Poland; and Dungarvan, Ireland.

I explained that Mayor Schember is committed to reviving Erie's relationships with Erie's four sister cities, then used that topic to segue into discussing Erie's efforts to welcome refugees, immigrants and new Americans.

The Italian students, in turn, praised their stay here. They found Erie people to be "very kind" and "welcoming," they said.

Their observations reminded me of something Maria Shriver writes about in her new book, I've Been Thinking … Reflections, Prayers, and Meditations for a Meaningful Life. Shriver's mother, Eunice Kennedy Shriver, had introduced her daughter to Sister Joan Chittister, OSB. Shriver now counts Chittister as a close friend and has spent time on retreat with the Benedictines in Erie.

In her book, Shriver writes about flying into Erie and being warmly welcomed by the sisters. Then she goes further: "Everywhere I go in Erie, people are like that, gracious and kind. It actually kind of throws me … What is it, I wonder? What is it about these nuns and this community that makes it such a haven of ?"

I wasn't fishing for compliments about Erie from the smart, outgoing Italian medical students, but their affection for Erie was genuine and they had picked up on the same vibes here that Shriver has felt.

Then one student really nailed it. "In Italy, we see (America) through the media only the metropolises," said Yusuf Ahmed, 25, a second-year medical student who plans to become a hematologist. But in Erie, "I have seen the real America," he said.

Without knowing it, he had summed up the quests by a number of writers who have journeyed to Erie in recent years to connect with the "real America." His take on Erie reminded me of Our Towns, the new book by James and Deborah Fallows, with its subtitle, A 100,000-Mile Journey into the Heart of America.

In their chapter on Erie, Deborah Fallows writes about new leaders emerging here: "Erie feels like a work in progress, but one that is clearly progressing." She also writes: "Erie finds a hypercharged boost of optimism and energy from another sizable portion of its population, refugees immigrants."

Coupled with the Fallows' observations about Erie, one of my takeaways from my visit with the Italian students is that it's important for Erie's older citizens — descendants of immigrants — to connect with newcomers, even if those newcomers are only here for a short time. That's what happened at the Nuova Aurora Society, where the Italian students mingled with club members one evening to swap stories about the regions in Italy where Erie relatives had once lived and to compare dialects.

Still, I wasn't sure whether my mention of Erie's sister cities was a significant piece of information to impart to the students, until the next morning when I attended Mayor Schember's weekly news conference, which kicked off with a rousing musical performance by veterans of the Erie Playhouse.

The Playhouse performers had just returned from Dungarvan, Erie's sister city in Ireland, where they had performed The Glorious Ones. Here I am at City Hall, where talented Erie musicians, fresh from Ireland, are singing a musical number set in Venice. Is that kismet? The Italian students weren't at the news conference but the Rev. Shawn Clerkin, associate professor of theater and fine arts and director of Gannon's liberal studies program, sang at City Hall and was also in the audience at Gannon's Yehl Ballroom the next afternoon, when the students received certificates and awards for completing the anatomy conference.

Clerkin told me that I was "preaching to the choir" about the importance of "global connections and intercultural sharing," especially at a time when many in our country are pulling away from world affairs and issues in favor of America first.

He shares a sense of pride in what we have to offer other cultures and what we, in turn, can learn from those cultures. His beliefs have been shaped by his experience when, as a high school student in Johnsonburg, he was an exchange student in Argentina and when, later, he and his wife Almi hosted students from Russia, China, Italy Belgium.

The Playhouse, under the initiative of Don Baxter, has had a relationship with the Dramatic Club of Dungarvan since 2007. The Erie group has been there twice and the Dramatic Club has visited here once. Now the two groups are working on a possible radio and live theater production about the Irish role in building the Erie Canal.

"It started off as a cultural exchange and it is now a friendship," Clerkin said.

Hundreds attended the Playhouse performance of The Glorious Ones on July 4 and 5 in Dungarvan, he said. The Erie show had finished in the top 10 of a national competition in the U.S. and, because it required minimal sets or costume changes, it was a "show meant to travel," he said.

At the mayor's press conference, the Playhouse group presented a certificate to Schember commemorating the Erie group's visit to Dungarvan. But the sister city relationship is about more than photo ops, Clerkin said.

"Dungarvan is a waterfront city redefining itself," he said. "They have very distinct moments of success. They can share strategies and successes … and how they have found solutions," he said.

And as for visit by the Italian students to Gannon, Clerkin said he is "very appreciative that they enhanced our campus."

His words were echoed by Rev. Michael Kesicki, Gannon's associate vice president for mission and ministry, who addressed the Italian students at the closing ceremony. "You have joined us and enlivened our campus," Kesicki said, before switching to the Italian dialect he had learned "at my mother's knee."

His speech was lovely and lyrical but I must confess: The only word I understood was the last one, "Amen."

Liz Allen hopes to visit Cortona, Italy, someday to learn about the Italian heritage of her orphaned mother. If she goes, one of the Italian students has promised to treat her to dinner at her family's home in Florence. You can reach her at lizerie@aol.com