The 2017 Primaries: Some Will Win, Some Will Lose – Some Are Born to Sing the Blues 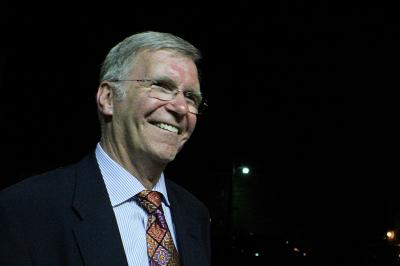 Although the fates of many races were determined Tuesday, May 16, Erie's mayoral primary election had long garnered the most attention. Headed into the race, a Democratic candidate – based on sheer odds of contenders – had a 14 percent chance of winning. A Republican had a 50 percent chance.

To cut to the chase: Joe Schember outperformed his six challengers for the Democratic nod, while John Persinger toppled his sole opponent, Jon Whaley, by more than two-to-one, notching a 1,943 to 779 – or 66 percent to 26 percent – victory (write-ins in the Republican race accounted for nearly 8 percent of the vote).

More coverage is to come in the next issue of the Reader, but here are some election-night thoughts:

Neither victory should come as a surprise to Erieities. Both Schember and Persinger were favored in their respective races, both having earned the Erie Times-News' endorsement, and both – citing their door-to-door presence the night of their victory – ran solid campaigns. While Persinger's field was less crowded, Schember faced a greater number of opponents and while he was often considered at the top, he wasn't alone.

How did we get here? Let's consult the numbers* since – as they say – numbers never lie.

*all numbers used onward are still reported as unofficial from Erie County.

Of the 97,283 registered Democratic voters in the same precincts, 26,418 ballots were cast, meaning that 27.16 percent of registered voters took to the polls.

Together, that yields an average turnout of 26.47 percent. It  also means that slightly more than one out of every four registered voters determined what the field looks like headed into the general election.

The race played out as many assumed it would: The boy scout bested the sledgehammer handedly. Although he's young, Persinger is the more traditional candidate with a more traditional overall appeal.

He does lean in on the 'end the status quo' approach, which is what Erie would have you believe it seems to be craving. But as the Times put it, Erie could stand to have a candidate with more of Whaley's iconoclasm – but just not Whaley. Erie voters seemed to agree.

Schember's victory (to the tune of 3,764 votes) represents 30.46 percent of the overall Democrat vote; that is, he notched nearly one-third of all total voters. It's not a majority of voters, but it's an impressive win.

Polls and pundits had these candidates towards the top and the polls proved to be right.

Not too far behind, Rubye Jenkins-Husband finished with 1,685 votes – or 13.63 percent of the vote. While she ran a markedly quieter media campaign, her name recognition (most likely from her time on City Council) landed her in the middle of the pack. To the Merski poll's credit, it had Jenkins-Husband polling third and was a harbinger that she'd finish strong despite not being considered as a frontrunner weeks prior to the election.

Together, the bottom-three candidates didn't muster enough votes to match Jenkins-Husband. Steve Franklin, who arguably ran the most austere campaign in the pack, finished last with 314 votes. Next, Almi Clerkin clocked in with 518, and Lisa Austin closed out with 555.

According to campaign finance statements filed between January 1 and May, Schember spent the most at $111,000. Merski, who finished second, spent just $2,000 less than Schember.

Where it gets interesting is that Austin spent $45,114 and finished fifth. Breneman spent less (at $39,729) and finished third.

What will be critical to watch will be how the winners handle victory, as well as how the losers manage defeat. The victor's speech tends to be easier; after all, rallying the troops and inspiring the masses to lend ears, dollars, and volunteer hours becomes simpler after triumph.

Seasoned candidates and politicians often have prepared statements ready to be read in such cases as when the outcome does not match the design of the game plan. After all, William Safire had a now-famed speech ready for President Nixon in the event that the lunar landing resulted not in humankind's first footprints upon the moon but in catastrophe.

Realistically – or even optimistically – no candidate goes into an election night thinking that that speech – the one acknowledging that the outcome is not the one that they had intended or hoped for – is the one they'll deliver. Yet, many do.

And a lesser number get to give that victory speech, basking in the glory of accomplishment. Which is what tends to make victory so sweet.

What the blending of these conversations will sound like is far more important to the chorus of Erie's song than the solos – both the somber and the sonorous – offer. The blessing of Erie's mayoral primary election is that it was populated with people who care about Erie's future and want to fight for it. The curse is that nine have become two by the process of the ballot. Whether alliances are formed or attacks are mounted will speak to whether Erieites unite in euphony or crumble in cacophony.

The next six months will tell. And something in the wind suggests they'll be no less exciting than the past six months that have led us to here to now.