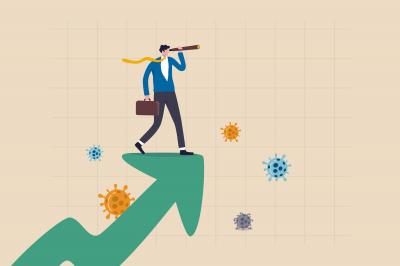 Before the pandemic hit Northwestern Pennsylvania, the Erie economy was plodding along. It lagged behind national and statewide economic indicators, such as the strength and scale of our industrial exports and the size of our overall job market — how many jobs we have versus how many people we have looking for work. Despite the lags, however, the local economy routinely grew at an annual rate of approximately one to two percent year over year.

When COVID-19 arrived, that momentum stopped and Erie County lost 26,000 jobs during the first four months of 2020.

Since April of 2020, the Erie economy has been recovering steadily, says Dr. Ken Louie, director of the Economic Research Institute of Erie at Penn State Behrend.

"Employment numbers are our most readily available statistic at the local level," Louie says. "If you look at employment, the job recovery rate is going well."

Erie County has recovered approximately 75 percent of the jobs lost to the pandemic since early 2020, up an additional 10 percent since the fourth quarter of last year and just slightly behind the national job recovery rate of approximately 82 percent.

This recovery is strongest in the transportation and warehousing sector, and within the financial industries sector, which have both fully recovered and added additional jobs across those sectors. Almost every sector of the Erie economy has experienced some level of recovery during 2021.

Louie says he's generally optimistic about the job recovery trend in Erie because it is likely an indication that our gross domestic product (GDP) — a measure of the region's economic output — will increase as well.

"It may take a while for real GDP to recover fully back to a pre-pandemic level, simply because it has been on such a steep decline — almost 6 percent because of the pandemic," Louie says. "It was pretty stable prior to that, but what's pushing it in a positive direction now are the good things going on at Wabtec, developing next-generation locomotives, and the continued investments and activity in the central city."

Ongoing development by the Erie Downtown Development Corporation (EDDC), which has bolstered retail and hospitality sectors downtown, and the technology-centered investments of Erie Insurance, Gannon University, the McGee Women's Hospital, and others, Louie believes, "will prove to be important contributors to our real GDP in the long run."

Wages are increasing marginally as well, but those increases are being offset by inflation caused by supply and demand tensions that have resulted in what economists call "pent-up demand." Essentially, we went without certain products during the pandemic as a result of supply chain issues. Now that the supply chains are normalizing, everybody wants those products and that's creating greater demand and keeping prices higher than normal.

This too shall pass. How quickly it passes remains the question on everyone's mind. And because Erie tends to lag behind national economic trends — both positive and negative trends — the impacts of government-driven corrections to the market felt by consumers may also remain on the horizon for the short term.

What's more pressing for the long term is the waning number of people looking for work in Erie County. That's because the size of the labor force is an important variable in the equation for future progress and, as Louie says, "the most important resource we have for the creation of value" — goods, services, and income.

But Erie County is facing an aging population that is retiring or opting out of the workforce more quickly than it can be replaced. At the same time, we have younger members of the workforce who are reevaluating the nature of work itself, looking for jobs rather than careers, and embracing roles that afford them the flexibility to have a more appropriate work-life balance. When they don't find those opportunities here, they're leaving Erie County for places that do.

It's a complicated matrix in a moment of unprecedented change.

But between the continued investments in our neighborhoods and in Downtown Erie, coupled with rural mainstreet initiatives fueled by ECGRA and ARP funds, and the reinstatement of federal programs to resettle New Americans in Erie County, there is reason to remain optimistic.

All we need is leadership that is willing to commit to a solution rather than waiting for an opportunity. It's a bet we have to make.

The words written by urban planner Charles Buki about the City of Erie in 2016, now, in a post-pandemic era, seem ever more true for the county as a whole.

"The time has long passed when Erie had the luxury of assuming future prosperity," he wrote. "Placing bets is part of leveraging the good cards in [Erie's] hand."