The Answer Is…: Reflections on My Life 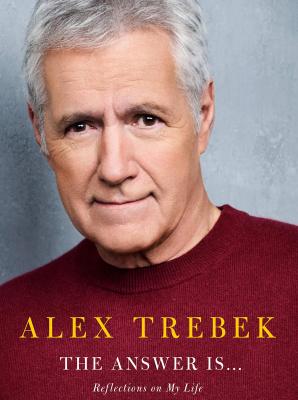 For more than 35 years, Alex Trebek made his way into America's living rooms as host of the popular quiz show Jeopardy!, a game of skill and knowledge. Bringing both entertainment and education into the homes of millions, Trebek became like a family member to many, myself included.

In his 2020 memoir, The Answer Is…: Reflections on My Life, Trebek looks back, both on and off screen, following his 2019 diagnosis with stage four pancreatic cancer. Following the immense outpouring of support from fans across the globe, Trebek broke his more than three decade silence on writing about his life, stating, "I want people to know a little more about the person they have been cheering on for the past year."

Told in beautifully written prose in the form of short, succinct vignettes, readers learn more about Trebek's life before and during his iconic tenure on Jeopardy!

A glimpse into Trebek's childhood in rural Canada reveals his relationship with his parents — his father a Ukrainian immigrant, his mother a French Canadian — as well as his first forays into a career in show business at the Canadian Broadcasting Company (CBC).

Although the book details Trebek's life, it follows more closely to a "Greatest Hits" selection rather than a full, nitty-gritty memoir. Trebek reflects back on what he has learned over the years, offering his own personal anecdotes for subjects ranging from marriage and parenthood to education and success. In light of the game show host's November 2020 death at the age of 80, this feels more appropriate than if Trebek were to delve into great detail regarding devastating points in his life. Instead, they are mentioned, but lessons are learned and wisdom is imparted on the reader.

In later chapters, Trebek reveals what happened behind the cameras on the Jeopardy! set, exposing his kind and thoughtful nature. In such a high-energy, nerve-wracking game, Trebek took the time to make every contestant feel welcome and comfortable, knowing the potential each held. His relationships with former contestants throughout the years are a great testament to the host's genuine character, exemplifying his caring and supporting nature. From the start, he insisted on being the host, not star, of Jeopardy!, as he considered the contestants to be the real stars of the show.

Always insightful, often comedic, and occasionally irreverent (Alex Trebek swears, who knew!), The Answer Is…: Reflections on My Life is the perfect read for those who have heard of Trebek in passing, longtime Jeopardy! fans, or anyone in between.