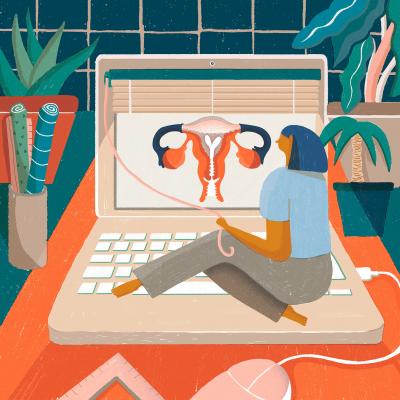 As a teenager, I boarded a bus to D.C. with a group from my Catholic high school to participate in a pro-life march. I felt like I was a part of something huge. I still remember the blisters I got on my feet. It felt like I belonged and was going the extra mile to practice my faith.

The pro-life club at school was a great way to connect with other students. I trusted and respected the priest who facilitated the group. We passed around grotesque plastic fetuses and watched gut-wrenching videos. I accepted the Church's position on abortion.

When I was a teenager, my stay-at-home-mom went back to work at a pressed metal factory. She'd come home sweaty and covered in dirt. She always wanted me to have the choices and the life that she didn't have. She wanted me to be self-sufficient, and have financial independence. She sacrificed a lot to send me to another town for Catholic school, because she felt the key to upward mobility was education.

As soon as I left rural PA and got to college,I was exposed to so many other views and people. I participated in protests and sit-ins as part of the anti-war movement. I would hear "protect our troops," and "protect the Iraqi people." And I thought, "they have heartbeats, too. And the same people pushing a pro-life agenda are supporting the bombing of civilians."

And for me, that was the real contradiction. I no longer felt that it was my place to force my religious beliefs on others.

One day in my early 30s, I began noticing changes in my body. I went to GNC to buy all the vitamins and herbs the internet recommended to resume your late period. No dice. A few days later I chugged some water, stopped at a gas station, and peed on a stick. When I got back in my car I immediately called the nearest Planned Parenthood.

Because of a medication I was taking, I had to wait until I was 6 weeks along, and have a surgical procedure. For two weeks I kept the secret while I endured my morning sickness. I made the two hour drive to Pittsburgh alone.

The receptionist told me I was lucky that the protesters were gone by the time I arrived. A volunteer held my hand and stroked my face during the procedure. The doctor was kind and helpful.

When I looked at what was removed from my uterus, I saw a tiny gray ball of cells, smaller than a pencil eraser. I was shocked that it looked nothing like those little plastic fetuses from Catholic school. That moment exposed the lie I'd been told for so long.

I feel deceived. I feel controlled. I think about six week bans and how the pro-life movement says "baby" and "heartbeat" over and over.

Let's be honest. One in four women have abortions in their life. The majority of Americans support reproductive choice. Yet so many people are shamed and silenced for having abortions.

I want to see more women in office. I want an end to the filibuster and passage of the Women's Health Protection Acts. This is about more than any march or any election. We have to name this for what it is - a continued attack on people who need reproductive healthcare, especially those who have the fewest resources. It's a direct attempt to take away our bodily autonomy and keep people in poverty.

Having my own abortion procedure didn't change my views, but it did solidify them. I've never really seen myself having children. I want to use my independence to make a difference in the world, and fight for fair wages, and support for mothers and families.

I am my mother's daughter. She poured everything she had into me. She wanted me to make my own path and have the right and freedom to do so. I can speak for both of us when I say - fuck oppression. Stand up. Fight back.

Molly Brechtel can be reached at molly@paunited.org

This was written prior to the June 24 Surpreme Court decision to overturn Roe v. Wade.