A bad haircut ruined the life of a middle-aged man. This is his story in sketches. 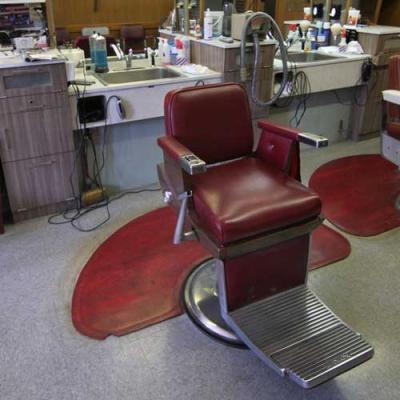 A bad haircut ruined the life of a middle-aged man. What should have been a routine follicle trimming turned into a catastrophe, even though its level of horror could only be imagined, as the man standing on stage was completely bald. To the rest of us, looking in on the moment that shattered this man's world was an intimate and comical scene as a bald man described the atrocity atop his head in a series of "whooshing" sounds, and then took the next logical leap: head west and search for a new sense of self.

The six actors and actresses at the Performing Artists Collective Alliance took on multiple roles in their production of "The Bad Haircut: A Disconnected Comedy" to make a whole picture out of the disconnected scenes of the ensuing soul search. This was the second run of the original comedy by Richard Boler, of Erie, and the first time it was put on by he PACA. Mark Tanenbaum, the show's main character, delivered a stellar performance as a man searching for his identity after a life-changing trip to the barber. As he put it, "That haircut disconnected me from everything around me and from myself." While he traversed the country and attempted to reconnect himself to the world, his hilarious life story somehow became the stories of our own lives as the dramatized sketches hinted at reality.

The westward journey that made up the majority of the play was filled with a slew of characters who each represented a stereotype of mid-adulthood. There were the married women taking selfies at a bar, the man who still lived with his parents and played an all-Browns version of "fantasy fantasy football," and a group of divorcees and stroke survivors looking for solace in a spiritual group. One of the most outstanding characters was the office boss, played by John Stockhausen, who was so absorbed in his own life that one of his employees quit his job after a heated argument about what it is the company actually does.

Here, Scott Frisina, the disgruntled employee, lamented everything that had gone wrong in his life lately – his divorce, his parents' Alzheimer's, and his child's autism, just to name a few. While listing off all the causes of his short production quota, he and Stockhausen argued in circles about what the production of "units" even means. Finally, Frisina stormed out of the office and Stockhausen returned to his real priority: a game of phone tag with an automated voicemail at the bed and breakfast he was attempting to make reservations at. The battle between Stockhausen and the automated voice, played by Karen Schelinski, were some of the funniest lines of the show because of their reality. Stockhausen simply wanted to make reservations for himself and his wife, but the overly excited automated voice had no options that included his request. As Schelinski fixed her hair and adjusted her posture, Stockhausen pounded his fists and screamed at the happy voice on the other end of the line. Just as he could not tell his employees what their company actually does, the automated voice could do nothing to help him either.

The show moved quickly as the nameless main character hopped from one job to the next. After the leaving the office job, he joined the crew of an early early morning radio show, he greeted customers at Y-Mart (WalMart's new competitor, which had every product in the world, none of which were available for purchase), and he served on a city council board where he listened to an old man complain about a rusted refrigerator. None of these new jobs gave him the new sense of purpose he was looking for.

Each character he met at each new job forced both him and us to think about our lives. We considered the perspective of an overly optimistic, blind, wheel chair bound woman, the call for the return of the good ol' days from an elderly man, and even the agony of the office boss who just wanted to make reservations for him and his wife. With a range of characters at many ages and stages in life, "The Bad Haircut" is ultimately the story of finding a little bit of yourself in every person you encounter, and using those disconnected pieces to create a sometimes hilarious, sometimes heartbreaking whole picture of yourself. Every piece of the picture was overtly dramatic, yet we were still able to see the roots of reality even in the most absurd scenes.

As the barber who created the bad haircut put it, "There is no life if you don't connect to it."