The Deviant's War: The Homosexual vs. the United States 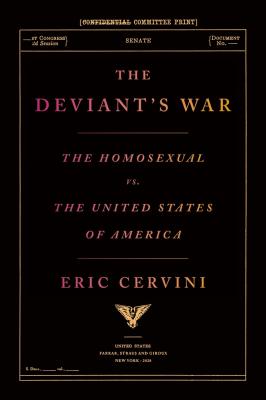 The Deviant's War is a nonfiction book that takes an in-depth look at homosexual politics before the gay rights movement. Harvard grad and LGBT historian Eric Cervini maps out the life story of Frank Kameny, a former WWII vet who fights against a discriminatory system that has stripped him of his government title as an astronomer. Now known as one of the leading figures of the gay rights movement, Kameny brought the first civil rights case based on sexual orientation before the Supreme Court, later fighting to have homosexuality removed from the American Psychiatric Association's Diagnostic and Statistical Manual of Mental Disorders. Cervini's extensive research is supported by declassified government documents and thousands of personal documents and accounts.

Cervini educates the reader on key political figures that supported or hindered the gay rights movements, ranging from former President J. Edgar Hoover to Stonewall staple Marsha P. Johnson, while also sharing firsthand accounts of the closeted subculture of early LGBT organizations like the Mattachine Society. Kameny's life as a pillar for the gay rights movement ties all the information together.

Cervini has produced a jaw-dropping educational work that should be taught in any LGBT history course. The book portrays the life of gay Americans as a fight to survive and eventually leads into the burgeoning gay rights movement of the '70s. Any curious queer person should look to this text for the true story of the gay individuals and historical events that led us to our modern visibility.
— Michael Mongera