A list of the Erie Playhouse's upcoming productions and events 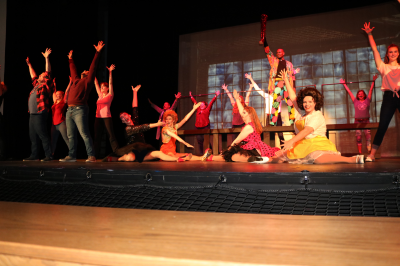 Company members of the Erie Playhouse stage a preview of their upcoming season, with shows like Kinky Boots planned for the future.

With two main stage musicals still to go this summer– Spring Awakening starting July 12 and 42nd Street starting August 8 – the Erie Playhouse recently announced the lineup for their upcoming 2019-2020 season. It features a mix of classic favorites, fresh takes on familiar stories, and new hits hot off their Broadway debuts. The promotional materials this year are similar to last season, with members of the community – often representing pivotal local organizations – serving as models, dressed in one of the main roles that will be cast later as the season progresses.

Based on Gaston Leroux's 1910 novel The Phantom of the Opera (not to be confused with Andrew Llyod Weber production). Music and lyrics by Maury Yeston, book by Arthur Kopit.

The Curious Incident of the Dog in the Night-time

Winner of seven 2013 Olivier awards (and a 2018 production by Dramashop), this play is a reworking of the 2003 Mark Haddon novel. It follows 15-year-old Christopher Boone, a mathematical prodigy – with an unspecified disorder on the autism spectrum – who finds the body of his neighbor's dog

This take on the classic fairy tale was originally written for a television production starring Julie Andrews. Music by Richard Rodgers, lyrics and book by Oscar Hammerstein II (with Douglas Carter Beane).

This Victorian thriller by playwright Patrick Hamilton was made into a 1944 film starring Charles Boyer, Ingrid Bergman, Joseph Cotten, and Angela Lansbury, and gave way to the modern psychological abuse term.

Based on the 1911 novel by Frances Hodgson Burnett, this musical debuted on Broadway in 1991, winning multiple Tony Awards and running for nearly two years, with a revival in 2018. Music by Lucy Simon, lyrics and book by Marsha Norman.

The smash Broadway hit based on the 2005 film centers around the unlikely friendship between the heir to a shoe company and a drag queen named Lola, and originally debuted in Chicago in 2012, going on to a successful world tour. Music and lyrics by Cyndi Lauper, book by Harvey Fierstein.

Adapted for young audiences, this production follows the classic film and musical. Music and Lyrics by Charlie Smalls, book by William F. Brown.

The 2013 Disney tale of two sisters, was staged Broadway in 2018, with this youth-friendly production in one act. Music and lyrics by Kristen Anderson-Lopez and Robert Lopez, book by Jennifer Lee.

Based on the 1975 Natalie Babbitt novel and the recent production – which debuted on Broadway in 2016 – tells the story of a rural family who discovers the secret to immortality. Music by Chris Miller, lyrics by Nathan Tysen, book by Claudia Shear and Tim Federle.

Ring in 2020 with your favorite Broadway hits performed by some of the Erie Playhouse's best.

Taking the form of a traveling musical revue, this work from the iconic composer and lyricist details real-life (successful and unsuccessful) attempts to kill the President of the United States. Music and lyrics by Stephen Sondheim, book by John Weidman.