Flirt with the future of art and technology at Artlore Studio and Gallery and the Erie Movie House's gallery night. 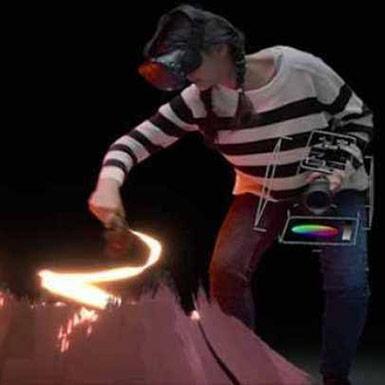 "Traditionally, drawing was a way of representing 3D space; to draw in 3D space is a completely different challenge," Scott McCloud, a cartoonist and author, says in a video produced by Google VR that explains the Tilt Brush. He's not wrong, and perhaps the first hurdle most people must overcome is wrapping their minds around the concept.

Fortunately, the cutting-edge Tilt Brush, which Artlore co-owner Stephen Trohoske described as two remotes "that act as hands and a virtual pallet of colors and other tools," will take center stage as the feature demonstration at the collaborative event hosted by both Artlore Studio and Gallery and the Erie Movie House. Guests will get to see how this incredible application of technology is being used to create works of art in three dimensions, using space (no surface necessary) as the canvas.

"This is a whole other way of combining imagination and creativity with technology that opens up different avenues in the brain and our visual perception of what's being created," Trohoske said.

Guests can arrive at the Erie Movie House at 7 p.m. on the night, and witness artists Jason Amatangelo and Karma Tattoo-Studio's Jen Christina manipulating the Tilt Brush via the HTC Vive, the virtual reality system that works in conjunction with the Brush. The results of the artists' actions will be broadcast live on the theater's screen. Just a few doors down at Artlore, the studio will also be simultaneously hosting a gallery night with live music and a new fall jewelry collection by Artlore co-owner Lena Logvina.

Both events are completely free; thus, what Trohoske called Artlore and Erie Movie House's collective effort to "push culture forward" in the community is an accessible experience that flirts with the future of art and technology. — Cara Suppa