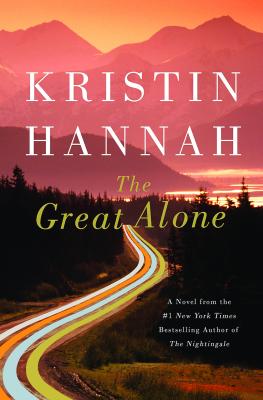 Kristin Hannah's best-selling coming-of-age novel The Great Alone is so much more than that — an intimately woven tapestry covering parts of two intense decades in the life of Leni Allbright, a girl transplanted to northern Alaska as a teen by her PTSD-scarred father. The latest of Hannah's 16 works, it's already optioned for film, and, in the hands of the right cast and director, should be one you'll want to see.

The Great Alone is also part Alaska: The Last Frontier and part The Shining. When former Vietnam POW Allbright inherits a cabin in remote Kaneq, Alaska from an Army buddy, he moves wife Cora and daughter Leni to a place where he hopes he "can breathe again." Breathing is the least of problems as the deep indigo of the Alaskan winter fills every corner of their lives and cabin fever drives the last bit of self-control out of . With a history of violence, he turns on his wife and eventually his daughter in a series of increasingly brutal episodes that Hannah's vivid writing makes painful to read. You'll want to pull your eyes away from her razor cut description of domestic violence and skip ahead. But you won't be able to. This story sinks its hooks deep into the reader, and you'll no more be able to leave it than Hannah's characters can run from the troubled . How Cora and Leni deal with the tragic consequences of Cora's decision to follow to Alaska marries beautiful writing with a clever plot and an unexpectedly uplifting climax.

The Great Alone is full of rich and varied characterizations. Most of the story is told through Leni's wondrously elemental child's point of view, and it's hard not to form a bond with her. The small supporting cast of two-fisted neighbors, with names like Large Marge and Mad Earl, backfill nicely with colorful characters.

The Great Alone is a striking example of a story that couldn't have unfolded anywhere except the place Hannah chose for it. She's selected a magnificent canvas for her word paintings and makes full use of the beauty that spawned several cable television series about Alaskan homesteaders. Her setting descriptions interlock with her characters' physical and emotional struggles like dance partners.

The Great Alone is also a Romeo and Juliet story of a too soon, forbidden love, told with grace and sensitivity, as teenage Leni and local boy Mathew discover each other, to the chagrin of .

The book is not without its shortcomings, like the quirky use of parenthetical phrases with no apparent justification, and the out-of-place, Amish-sounding names of her central characters , Leonora, and Coraline. The book may be a bit overlong for its arc, as well, at 433 pages. But these are minor gripes about a well-told and jarringly emotional story. A quintessential feminist novel that speaks eloquently to a broad audience, The Great Alone earns five stars.

St. Martin's; 433 pages; $28.99 (hard cover) // Richard Perhacs practices law in Erie and holds a Master of Fine Arts in Popular Fiction. He can be reached with comments and suggestions for reviews at rperhacs@gmail.com.