The Inner-City Neighborhood Art House at 25

Over a quarter-century of helping kids bolster their 'inner spirit' 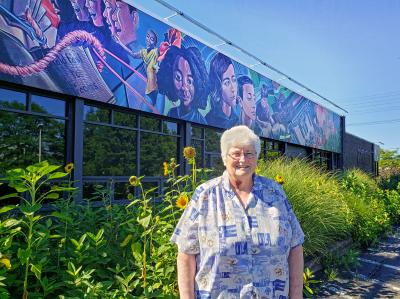 Ranging in age from 7 to 14, the youngsters at the Inner-City Neighborhood Art House might be a bit wet behind the ears to join the ranks of the Erie Reader's 40 Under 40 honorees.

And at age 76, Sister Annette Marshall, OSB, executive director of the Art House, jokes: "I've been around for a while."

But if you take the measure of the places as well as the people that contribute to Erie's vitality and ingenuity, the Neighborhood Art House would make the cut, especially because this year marks its 25th anniversary of "Inspiring a Better Future Through the Arts," as its logo states.

Sister Annette, the staff, and the children refuse to let the pandemic stifle their creativity.

The Art House's annual fundraiser, Taste of the Arts, which normally features cocktails, food stations, silent and live auctions, and the sale of children's artwork, is going virtual this year, starting at 5 p.m. on Sept. 15.

Children who are part of Sister Pat Lupo's Green Team program at the Art House organized a Climate Shoe Strike on July 24. Socially distanced in the Art House parking lot at 201 E. 10th St., the kids sang, beat drums, led chants, and, with the poise of seasoned activists, gave interviews to reporters. A student-designed flier to advertise the strike depicted the globe sizzling in a frying pan.

The winter-spring term at the Art House ended March 13 with the statewide shutdown order. "We thought maybe it would be for a few weeks," said Rhonda Berlin, who teaches piano at the Art House.

When it became apparent that COVID-19 safety precautions would be here for a long time, she switched her lessons to Zoom. Not all of the kids, though, have pianos or keyboards at home, so when someone offered to donate keyboards, "We were able to connect them with families for porch drop-offs, with no contact, and we were able to get the students going again," Berlin said.

The Art House also has a new mural on the side of the building facing East 10th Street. If you are taking a mural tour, be sure to stop to see this work by Erie artist Ehren Knapp. In lush colors and detailed drawings, Knapp depicts the marvelous array of creative endeavors available to girls and boys at the Art House, including gardening, sewing, weaving, photography, painting, poetry, voice, hoop dancing, and instrumental lessons.

Sister Annette is struck in particular by the image of the wide-eyed, happy girl in the middle, gazing straight ahead. Nearby, there's a book titled Hold Fast to Your Dreams.

"That girl is looking into her future," Sister Annette said.

When Benedictine sisters Mary Lou Kownacki and Joan Chittister came up with the idea for the Neighborhood Art House, their goal was to provide a brighter future for children who lack access to the enrichment activities that more well-to-do families take for granted. But they also looked back to the religious order's past, to stay true to the ideals that brought the sisters from Bavaria to Erie in 1856.

"We came to educate the German immigrants," Sister Annette said. But after St. Benedict Academy and St. Mary Catholic School closed on Erie's east side, "We had no direct outreach to the children," she said.

Families in need could get meals at Emmaus Soup Kitchen. They could find clothing at St. Martin Center. But the sisters realized that there was "no place for the children to build their inner spirit and develop hope," she said. "They lived in a part of the city that didn't have a lot of beauty and there was little exposure to the arts. Families couldn't afford dance lessons and music lessons."

On East 10th Street, close to their existing ministries, the sisters found a former Goodyear Tire store. "The parking lot was overgrown with weeds. It was an eyesore for the neighborhood but it's where we wanted to be," Sister Annette said. "The idea was to bring beauty to the neighborhood."

The Art House began by offering after-school and summer classes in the visual, performing, and literary arts. Before Sister Annette became executive director of the Art House 10 years ago, she served as director of Erie-Allegheny Earth Force for 13 years. So when Sister Pat Lupo, OSB, was looking for a home to continue her work with youth on environmental issues, Sister Annette said: "Oh, come to the Art House and start an environmental strand." Sister Pat also incorporates nature art into her curriculum.

Sister Annette said the statistics "blew me away" when she realized that 2,700 youngsters have been part of the Art House over the years. She considers herself an administrator, not an artist, but she has begun to dabble in painting with chalk and pastels and has also taken some clay classes.

The fact that Sister Annette keeps expanding her horizons isn't a surprise. She showed her determination and grit from the time she was a young girl attending St. John the Baptist Catholic School (now closed) on East 27th Street. She wanted to attend the all-girls St. Benedict Academy for high school, but her father said he couldn't afford it.

"I sold popcorn at the stadium. I babysat all summer. I sold greeting cards," she recalled. "I earned the money so I would be able to go (to St. Ben's)."

But after one year, her father made it clear: She would have to transfer to the public high school, Academy.

Then, just before 12th grade, her dad had another change of heart and allowed her to return to St. Ben's for her senior year. That transfer put her on the path to becoming a Benedictine herself, entering religious life after graduation at age 17.

She remembers having "such an affinity for those sisters. I could see they were grounded, loving, happy."

Today, no one would think about encouraging a young girl to enter Catholic religious life at age 17, she said. But when Sister Annette was growing up, the expectation was that "you were on your way to your life's work right after high school," she said. For girls, the choices for your livelihood were narrow: becoming a nurse, teacher, secretary, maybe a factory worker, or getting married.

Now opportunities are wide-open, and the arts can help children reach all of their potential. That doesn't mean the kids have to become professional artists. Instead, the Art House achieves its goals if the youngsters can build on their "inner beauty and inner strength," Sister Annette said.

Of course, COVID-19 disrupted the Art House routines for months, but summer enrichment programs resumed after parents were surveyed and they said they would allow their children to return. Class sizes are much smaller. Children have their temperatures taken and wear masks. "The kids were wonderful with being aware of COVID-19," she said. "They were not the least bit reckless."

The summer reading program couldn't take place, though, because kids would have had to sit too close together with volunteer readers.

But reading of a different sort went on — reading music, that is, for Rhonda Berlin's piano and voice students, who took lessons on Zoom.

Three years ago, Berlin, 47, and her oldest daughter, Katie, 19, applied together to teach music lessons at the Art House.

"We answered a Facebook ad that they put out. I lived in Erie my whole life but I didn't know a whole lot about the Art House," Berlin said. "We ended up both starting there at the same time, teaching a couple of days a week."

Katie, a French horn player and music education major at Youngstown State University, is back at college now, but before returning, she also used Zoom for her Art House lessons, teaching trumpet. Now Berlin's younger daughter, Mandy, 17, has stepped in to teach Katie's students.

Teaching music to Art House students via Zoom also led to an additional opportunity for Berlin — she's now teaching piano and voice lessons virtually to other students. Because of the pandemic safety measures, "All of a sudden, there were all these kids with time on their hands and a lot of parents looking for structure and enrichment for their kids," Berlin said. Using Zoom, "I can teach kids anywhere. I don't have to worry about any dangers of teaching in person."

To boost spirits these days, Berlin, who has long been active in local theater, recommends the music from Rent. That musical "sends such a good message about living life to the fullest," she said.

There's a reason the arts are finding a way to endure through the pandemic, Berlin said. "People are trying to find ways to feed their souls."

Liz Allen was thrilled when her son delivered an acrylic painting to Erie from her 12-year-old granddaughter in Maryland on Aug. 20. You can reach her at lizallenerie@gmail.com