The McBride Viaduct: No Joking Matter

Preservation of bridge crucial for Erie's people of color 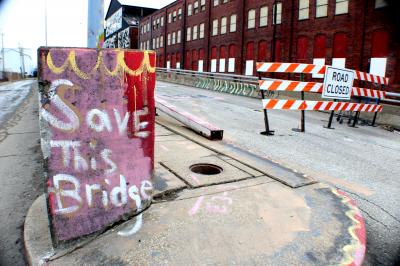 Nick Warren
For the Rev. Charles E. Mock and many other African-American residents of Erie, the decision to demolish the McBride Viaduct raises not only financial questions, but moral questions as well, specifically as they impact the more marginalized members of the community.

As a Christian and Black American citizen of Erie I am compelled by the moral mandate of conscience to respond to a view held by a recent writer, David Morrison, Sr. of Erie, Pa. I respond to his view in the May 13th, Sunday edition of the Erie Times-News. His view was captured by the line: "Viaduct lawsuit seems like a bad, misguided joke."

Time will not permit my addressing all his views. One statement to which I am responding is: "Since when is a dilapidated bridge, if razed, a civil rights violation?" I am certain that his question represents that of others as well and so I offer the following response.

Conversations around town have left many wondering where the truth lies about what can and cannot happen with the McBride Viaduct, as well as the question of why or why not? Newspaper opinions reveal citizens' confusion over various reports. Some people struggle in understanding the big fuss being made over a bridge, especially when the Bayfront Highway seems, supposedly, a safe choice for pedestrians. I am not sure if I can help those that seriously want an understanding of the leading voice of support for a public hearing — Erie CPR. But I seek to add to previous explanations of the seriousness of this issue. For us it is no laughing matter.

The viaduct bridge is a bridge over "troubled waters." By this, I and others mean, it is an issue connected to truth. In case you haven't noticed, truth is in trouble! Truth is drowning, along with many people in the troubled waters of lies and false reports, reports that are so politicized as to be misleading; thus the only way we can get to the truth is through open and honest discussion of the facts.

Such a discussion cannot take place with any integrity without a public hearing, not to be confused with two or three public meetings. In a public hearing those who testify can be held legally accountable for false information. Not so with public information sharing meetings. Contrary to what others might feel based on what they have heard from experts, remember that in a court of law there are experts on both the plaintiff's and the defendant's sides.

The troubled waters of the McBride Viaduct are not only a matter of truth that necessitates a public hearing, it is also a matter of faith. Genuine faith markets in humane values: values that respect all people, especially the most vulnerable whose needs are often ignored. If the troubled waters are a matter of faith's values, they can be filtered down to a civil rights issue based on racial/ethnic discriminatory state, county and city policy. The salvation of a bridge on behalf of a certain class of people may not be a big deal to some. However, to persons whose skin color prohibits them from seeing this as "troubled waters," take a walk in Black and Hispanic history.

When a people of color has had to fight, scratch and claw its way to equal treatment under constitutional law, it is no joking matter! How unfortunate that some can only see a "dilapidated bridge," "an old car fit for a junk yard," or "a safety hazard" that a Bayfront Highway corrects. I wish I had time to share what George Washington Carver re-purposed from someone's junk. There is strong evidence that this bridge can be repurposed at a cost far less than the cost of its demolition. Such evidence has a chance to be refuted at a public hearing!

Those who feel this viaduct business is a bad joke, a waste of time, much ado about nothing, etc., I also challenge with this. Come face-to-face with people of color who use this bridge on a continual basis. I am referring to well-researched data spelled out in an affidavit of complaint calling for a public hearing. The affidavit sites people in the East Avenue neighborhoods and census tracts as constituting 91 percent Black Americans and Latinos.

I guess when you don't have to walk the Bayfront because of the privilege of a car, you are spared worry about your clothes being drenched by puddles of water or dirtied by the sludge of melted snow from cars, trucks and tractor-trailers traveling at speeds over 50 mph only inches away.
Rev. Dr. Charles E. Mock

The troubled waters have to do with Erie's new development focus, given the 24/7 Wall Street report identifying Erie as the worst city in America for Black Americans. No joke! It must mean something to responsible citizens that even if 40 percent of this report is inaccurate, can we really live with 60 percent accuracy? How will those who we seek to attract to Erie respond to this? We know this report matters! The evidence of Erie's care was a press conference held at St. James African Methodist Episcopal Church a few months ago in response to this report. Present were stakeholders from business, government, faith communities, education, etc. Mayor Schember and others expressed their deep concerns about the message this report was sending to those they are attracting to Erie.

These troubled waters have to do with a history of redlining. Redlining is truly nothing to joke about. Redlining is an intentional decision made by those in control of money to not invest in certain areas of any given city. A red line is drawn around a geographical area with no uncertain meaning — no substantive investment in this area. This redlining was or is a part of an infamous "family" that also discriminated by dis-investment in education equality for certain people based purely on the color of their skin. Redlining was a part of the Apartheid "family" of South Africa and a part of the Jim Crow "family" in America less than 50 years ago.

Many protesting the demolition of this bridge without a public hearing have a hard time distinguishing this bridge issue from the recent education equity issue on behalf of public education. The Erie School District has fought tooth and nail for education equity in a system that unequally and unfairly distributes our Pa. tax dollars. Thanks to the courageous Erieites that screamed, "Enough is enough: enough of this treatment as if some children don't matter!" Thanks to the protests in Harrisburg to government officials, thanks to collective will, and thanks to help from Republicans who saw this as a civil rights issue instead of a partisan issue, Erie received what was needed — fourteen million dollars! What the Erie School District received was not all they deserved, but it was a substantial down payment on what was due from a history of educational discrimination.

The troubled waters have everything to do with economics. When in the city of Erie, $24 million can be raised in a matter of no time for downtown development, when city improvement grants can be applied for and awarded for making downtown safer and more accessible to tourists walking here and there in search of their destination, when close to a billion dollars can be secured for the revitalization of Erie, it causes us to ask "why?" Why can't we muster the political will to save a historic bridge that can possibly be saved and repurposed for a certain class of people and people of color? Don't all peoples' needs and hopes matter? Don't diverse and impoverished neighborhoods also matter?

If there is a difference of opinion on the safety or need for this bridge, why not join us in our call for a public hearing? Curious minds want to know for certain whether it can be saved or not, as well as where the truth lies.